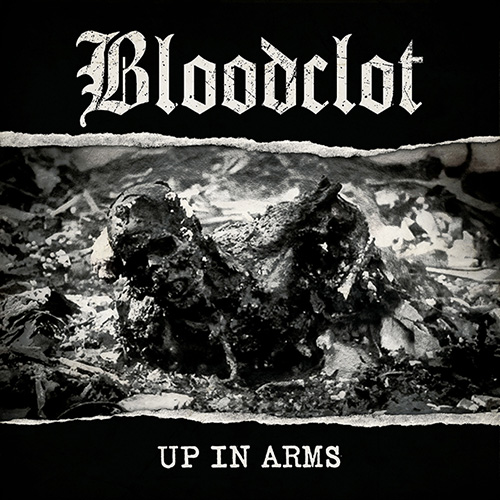 Comments BLOODCLOT singer John Joseph: “The music for Manic was sent to me from Todd who was in L.A. I listened on my i-Phone while I was in the gym training, left immediately, went home and wrote the lyrics. It’s that kind of a feeling. Lyrically, it’s about people mistaking kindness for weakness. Big fucking Mistake.“

At its purest, there is little that can match the visceral thrill and empowering spirit of hardcore. As front-man of New York City hardcore kings Cro-Mags, this is something John Joseph knows very well, and with ‘Up In Arms‘, he and his BLOODCLOT compatriots deliver a furious collection that hits hard on every level. From the moment the opening title track explodes to life, it’s clear that everyone involved is having a blast and playing from the heart, and that this is no frills / no bullshit music at its most passionate. “In this band we’re doing what each of us have always done: give it our all,” John Joseph states plainly. “We work hard, and we have a lot to say. Look around the planet – people are fed up with the corrupt ruling class. They destroy the planet and kill millions for profit, and the formula for our response is simple: Anger + applied knowledge = results. Don’t just bitch. Change it.“