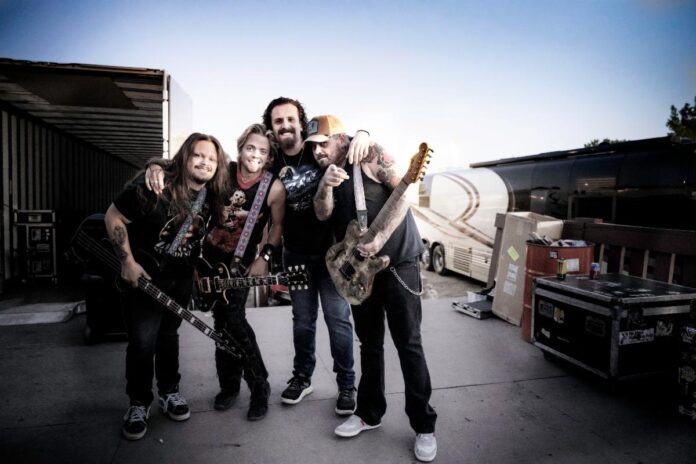 BLACK STONE CHERRY are excited to announce a very special London event to mark the arrival of their forthcoming ‘Live From The Royal Albert Hall… Y’All’ release, which is set to land via Mascot Label Group on Friday 24th June. A concert film and documentary of the Kentucky band’s triumphant show at the iconic London venue is set to premiere at the Prince Charles Cinema, Leicester Square, W1 on Monday 20th June, with the band in attendance. Frontman/guitarist Chris Robertson, guitarist Ben Wells, drummer John Fred Young and new bassist Steve Jewell will be participating in a fan Q&A, together with movie director, Mike Rodway, directly following the screening.

Just 250 tickets are available for this intimate event, which will go on sale at 10am this Wednesday 8th June, with an O2 pre-sale available from 10am today, Monday 6th June. Purchase yours here. Doors open at 7pm, with proceedings kicking off at 7.30pm sharp.

“It’s not everyday you get the privilege to play the Royal Albert Hall. It’s not everyday you get to film your show at the Royal Albert Hall. But what is guaranteed, is that this is our most badass, in-your-face, emotional and passion driven document of our band to date. We could not be more excited to not only release this to the world, but to be able to return to London and premiere it with you!! We will also be hosting a Q&A for all of your questions, as will our dear friend and director of this piece, Mike Rodway. England, it’s impossible to stay away too long! We’ll see you the 20th!”

On Wednesday 29th September 2021 – the year of the band’s 20th Anniversary – Kentucky’s favourite sons, BLACK STONE CHERRY, realised that childhood dream of playing at the legendary London venue. Check out a teaser from the documentary below.

From clubs to arenas and festival headline performances, no one puts on the kind of show that BLACK STONE CHERRY do. The band were one of the first international acts to tour the UK following the Covid19 lockdown restrictions easing, and they gave every single fan in attendance that night, a shot of euphoric happiness.

“To be honest, I was terrified. You think about how many great acts have played the place. The prestige behind it. We’ve wanted to play the Royal Albert Hall since the first UK tour in 2007. Walking in that place, it’s just breath-taking. You walk on that stage, and you say, we did it, and it’s a feeling that I will cherish for the rest of my life.”

The Blu-Ray’s live footage is interspersed with behind-the-scenes interviews, fly on the wall footage and archival insights into the band as kids first starting out, snippets of their first ever UK tour and heartfelt moments of reflection. But ultimately ‘Live From The Royal Albert Hall… Y’All’ was about bringing rock ‘n’ roll to London, Kentucky style.