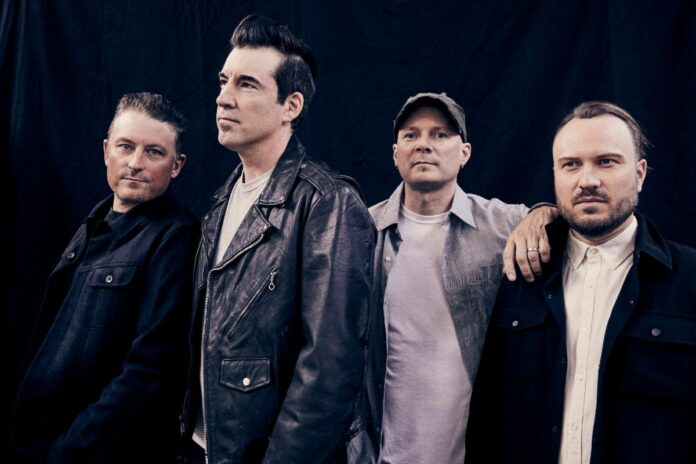 Multi-platinum rock band Theory Of A Deadman has returned with their hard-hitting new single “Dinosaur” (Roadrunner Records). PRESS HERE to download/stream andPRESS HERE for the official visualizer. The riff on “Dinosaur” lumbers ahead with all the swaggering force of a T-Rex and the grace of a Brontosaurus, while front man Tyler Connolly sinks his teeth into one of the band’s biggest and boldest choruses yet: “Hey kids, boys and girls, now we’ve really done it, it’s the end of the world…Now, we’re going out, going out like the dinosaur.“ The release of “Dinosaur,” produced by Martin Terefe (Jason Mraz, YUNGBLUD), marks the chart-topping quartet’s first taste of new music since 2020’s acclaimed album Say Nothing and a return to form stylistically.

“‘Dinosaur’ takes us back to our roots with this riff-driven rocker,” shares Connolly. “To me, it feels like it could fit on any of our albums, but I will say if you like the old Theory Of A Deadman, you’ll love the new Theory Of A Deadman.”

“Rock is where we made our bed for all these years,” adds guitarist Dave Brenner. “It’s been a while since we had an up-tempo in-your-face track like this – and it felt good.”

With sky-high hooks, riffs as thick as a 2×4, rumbling grooves, and a razor-sharp sense of humor, Theory Of A Deadman — Tyler Connolly [lead vocals, guitar], Dave Brenner [guitar, backing vocals], Dean Back [bass], and Joey Dandeneau [drums, backing vocals] — have quietly persisted as an unapologetic, unbreakable, and undeniable hard rock force with major multi-platinum hits and countless sold out shows in each of the past two decades. Jamming together in basements throughout high school, the band burst out of their small hometown of North Delta, British Columbia with the self-titled, Theory of a Deadman, during 2002. In addition to the double-platinum breakthrough album Scars & Souvenirs [2008] and gold-certified The Truth Is… [2011], Theory have notched a procession of hits, including the gold-certified “All Or Nothing,” “Bitch Came Back,” and “Lowlife,” platinum-certified “Angel,” “Hate My Life,” and “Not Meant To Be,” double-platinum “Bad Girlfriend,” and triple-platinum “RX (Medicate).” As the biggest smash of their career thus far, the latter hit, off their 2017 album Wake Up Call, marked their third #1 on the Billboard Hot Mainstream Rock Tracks Chart and garnered a nomination for “Rock Song of the Year” at the iHeartRadio Music Awards. Their impressive catalogue has also logged two Top 10 debuts on the Billboard Top 200 and amassed more than 1 billion collective streams on Spotify alone and over 675 million views on their official YouTube. In 2020, the award-winning band’s seventh studio album Say Nothing landed at #2 on the Billboard Alternative Albums Chart and #3 on the Rock Albums Chart. Plus, the album, featuring the chart-topping and powerful single “History of Violence,“ earned praise from American Songwriter, Billboard, Alternative Press, and Classic Rock Magazine who awarded it “4-out-of-5 stars.”

Theory Of A Deadman once again deliver a barrage of anthems, beginning with the single “Dinosaur” and more to come.