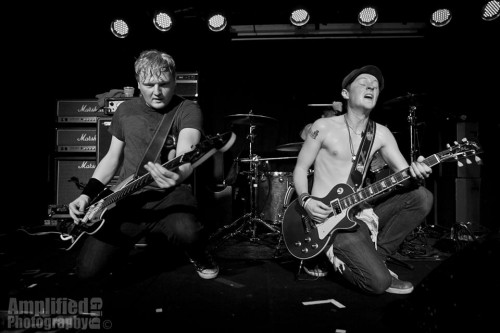 Fresh from their appearance at Hard Rock Hell at the weekend, Theia – one of our tips for the top in 2015 – finish a wonderful year with their biggest show to date

Theia, one of Britain’s brightest and hardest working rock  bands, have announced plans for their biggest headline gig to date.

The band, who have played up and down the country in 2014, bring the curtain down on a stellar year with what is sure to be a fantastic gig at Wolverhampton’s Slade Rooms on 20th December.

Joining them for the pre santa shindig are local legends My Great Affliction as well as Cancel Tomorrow and Lynus, and Maximum Volume Music will be there too.

The three piece, Kyle Lamley on guitar, vocals, Paul Edwards on bass, and John Tolley on drums, have just played at the prestigious Hard Rock Hell event in North Wales alongside headliners Queensryche and Blue Oyster Cult as well as MVM faves Buffalo Summer and Blackwolf and, when we caught up with John just before he left, its fair to say he was excited: “I can’t wait to do this with my brothers,” he said: “HRH is getting its face melted off.”

Family man John is a relatively recent addition to the band, having only joined in the summer, but tells us he has has settled in superbly. He has played in bands throughout the Midlands, but says in Theia, the vibe is different: “It’s been fantastic, the guys are brilliant and they have been so welcoming. They’ve treated me like family.”

As well as the Wolverhampton concert – and you can buy tickets for that here, the band have a new single in “We’re Alive” oh and next week, we might just be announcing some Maximum Volume related Theia news…..