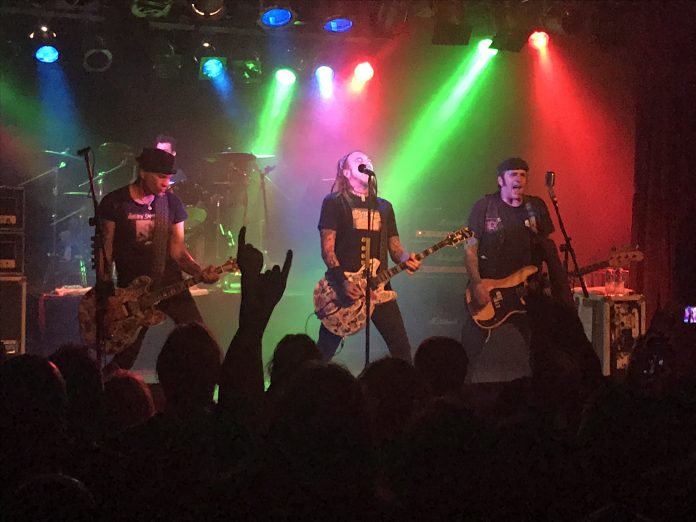 There are ways to get me onside pretty quickly. Suggesting that the day social media took over our lives was the day the world went to the dogs is one. Dedicating a song called “Die For A Lie” to Tony Blair is most definitely another. Andrew Tranter, the singer in Stoke’s Headsticks does both of those things. He does – along with his bandmates – do a lot more besides, in fairness. Their 45 minutes here starts in pretty sedate fashion. Stephen Dunn strums an acoustic, but even in “Mississippi Burning” there’s an undercurrent, a thought that you wouldn’t want to get on the wrong side of the argument. The influences are obvious – but then if you’re a politically aware folk band, have a punk side and don’t have a nod to The Levellers then you’re doing it wrong – but “Flatline Town” is full of harmonica, and for every song about the homeless, “Cold Grey English Skies” is a cracker too, there’s a ska flavoured romp like “I Love You But I Don’t Understand You”. A couple of new songs are given an airing, with “My Own War” particularly impressive. The same could be said for the rest of their set, and by the time “You’re Killing America” from last year’s fine “Muster” album whips up a storm of indignation to end things, Headsticks have made many new friends.

The Wildhearts, we learn midway through this set, haven’t played this venue since 1995. That’s worth a mention because that tour – a little further south in Wolverhampton- was the first time I saw them.

It is not a glib statement either to suggest that what happened that night changed my life, changed the way I saw music, and ranks still as one of my top five gigs of all time.

And you know what? They are still the best band on the planet when they do that.

There is a magic that happens when these four get onstage – and it’s drummer Ritch’s 50th tonight – together that doesn’t happen anywhere else. And it’s the classic line up too. Bassist Danny is back in the fold after health and addiction problems, and watching him sing “Anthem” while sitting on his chair is a special moment, while whatever CJ does on guitar ever, he never looks as perfect as when he’s to Ginger’s right.

In truth, It had looked like being an iffy night when something was clearly wrong before they were due on, but like (nearly) always with the band, it’s all forgotten when they actually play.

And what a set it is too! Only one song – “Vanilla Radio” – was written this century, this is the Greatest Hits to end them all. Because they’re not just the bands history, but ours too.

“Sick Of Drugs”, “TV Tan” and then 1.2,3 of “My Baby Is A Headfuck” “Suckerpunch” and “Caffeine Bomb” might be the best five songs that start any gig this year – and I’ve just been to see The Stones twice – and they just keep coming.

It’s a glorious blur of noise and sheer, unbridled joy, “Nothing Ever Changes (But The Shoes)” is simply glorious as is “Weekend (Five Long Days)”.

The staples of “Nita Nitro” and “Geordie In Wonderland” get them bouncing and singing respectively, while my personal favourite “Love U ‘Till I Don’t” would usher in an encore, except The Wildhearts don’t mess about with such shite and instead do three more anyway.

“Greetings From Shitsville” is magnificent, and “I Wanna Go Where The People Go” is the perfect end that it’s been for 23 years.

But there’s a moment in the one before – the B-side-turned-classic “29X The Pain” – that sums it up best. There’s a line in it that goes “I’m up, how could I get down, when I got all my friends around?” and as he sings it, you can’t help but think of Ginger and his struggles with depression, but also all the times this bands music has got everyone here (onstage and off) through too.

Subtext: For give or take 25 years they’ve been here.They’re not going anywhere. They’re The Wildhearts, they belong to us all. And, here tonight, they were the best there is.

Previous article
DEICIDE ON BLASPHEMY
Next article
BAND OF THE DAY: URNE