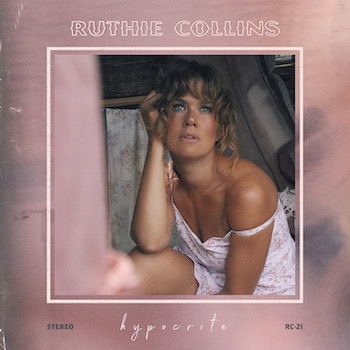 Sidewalk Records recording artist Ruthie Collins’ dreamy blend of heartfelt lyrics and aching vocals hits a new peak with ‘Hypocrite,’ a power ballad about hurt, honesty, and the ripple effects of a rough breakup. The song had a World debut on the Bob Harris show on BBC Radio 2, Thursday, 7 Oct. The music video makes its debut with CMT today, 8 Oct, and ‘Hypocrite’ is available HERE today.

‘Hypocrite’ showcases Collins at her best: occupying the uncharted territory between genres, swirling together the southern sounds of pedal steel and Telecaster guitar with the pop/rock punch of a meteoric chorus. She calls the track “a song about that thing we all do: pretend we’re totally ok when the sky is actually falling down all around us.”

“A relationship I really didn’t want to end was clearly slipping away from me, and even though I was trying to pretend I was ok with it all, I was a complete wreck on the inside,” Collins says, remembering the night she co-wrote ‘Hypocrite’ in a 1973 Airstream trailer with fellow road warrior Natalie Stovall (Runaway June), who also lends backup vocals. “I hope ‘Hypocrite’ lets people know that even though we’re all trying our best to keep it together, there’s so much freedom in owning your emotions — in moving through them instead of blocking them — and that there is true healing and love on the other side.”

The song’s music video finds Collins haunting the birthday party of her former flame. Like the song itself, it’s a cinematic and dynamic clip that makes no attempt to hide the hurt of its creator. Collins has always rooted her songwriting in honesty, and ‘Hypocrite’ — which arrives one year after her 2020 album, ‘Cold Comfort’ — highlights that commitment to truth.

“I think we can live in a world right now where we can just be who we are,” she says. “Feel your feelings. Speak your truth. I don’t feel the need to fit my music into a category, because life doesn’t fit into a category.”

Raised on a grape farm in Fredonia, New York, Ruthie Collins fell in love with music from an early age. She learned about the classical world from her mother, a pianist and organist, and the gospel world from church, where she sang in the choir, but it was the radio that first introduced her to the magic of pop and country, and she spent her formative teenage years enamored with the stories and melodies that lit up the dial. After college, Collins spent five years writing songs and waiting tables in Nashville before landing a deal with Curb Records. Named to CMT’s prestigious “Next Women Of Country” series, Collins began turning heads almost immediately with a series of critically acclaimed releases and showstopping festival performances that prompted the LA Times to praise her “sunny demeanor” and Rolling Stone to rave that “Collins’ voice has the fluttery nuances more common in Seventies Laurel Canyon than in modern country.” Her latest album, ‘Cold Comfort’, a captivating blend of cinematic roots, intimate folk, and old-school country, is available everywhere.