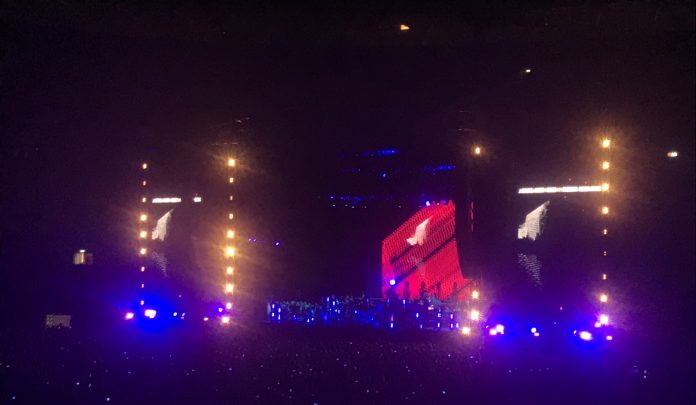 How do you know you are dealing with rock royalty? Ok, the fact the thing is in Wembley stadium is a giveaway I’ll grant you, but go with it. How about the fact that there’s an arena act as opener? Kaiser Chiefs Ricky Wilson has come well-dressed for the night too, in a full dinner jacket for a set that covers all the bases and is a lot of fun. From “People Love One Another” to “Oh My God” 40 or so minutes later, there is nothing really not to enjoy. There’s the hits – “Ruby”, “Everyday I Love You Less And Less” and the one about foreseeing trouble in the streets, there’s the ones in between, “The Angry Mob” and “Factory Gates” and there’s a couple of new ones – “Golden Oldies” being the pick – that suggest this is a band still with plenty to offer. More than that, though, they are a band with songs that people know and which can put smiles on faces. Job very much done. 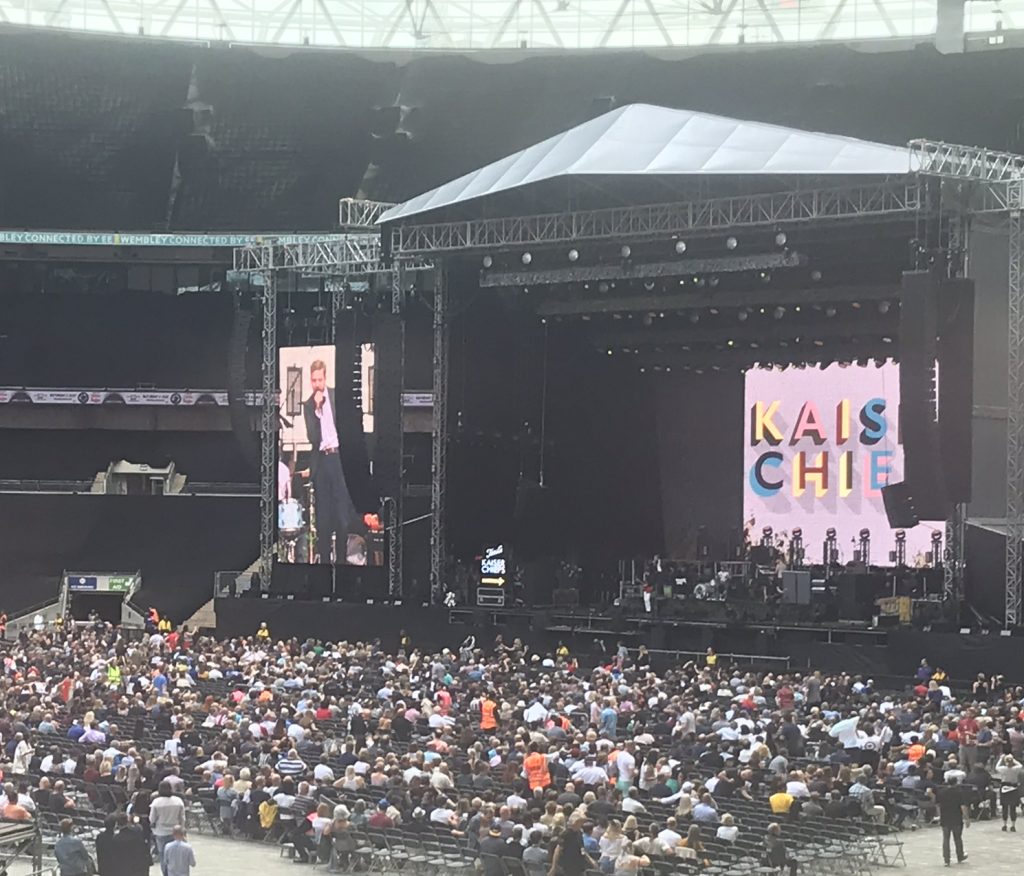 Looking around the stadium as he comes on, Pearl Jam have brought plenty of fans here tonight to watch their boy. Eddie Vedder is up for the task too,  after all, he can play these type of venues in his sleep. There’s a reason for that too. He has a brilliant voice and sings brilliant songs. His hour is mostly made up of Pearl Jam stuff. But it has a different slant. A gorgeous string-drenched “Alive” is a clue, and “Corduroy”, done acoustic is superb. One of the times he veers from his own stuff is to play Simon Townshend’s “I’m The Answer” – for which he is joined by Townshend – and if another, a take on “Every Little Thing Called Love”, proves that Queen songs are still crap even when they aren’t sung by Queen themselves, then the Pearl Jam jams are much better. “Better Man” is beautiful, “Black” (which sees Glen Hansard join Vedder) translates perfectly and “Porch” shows why Vedder is here. The man himself is clearly in awe, he says more than once that he is a huge fan of the headline act and that shines through. 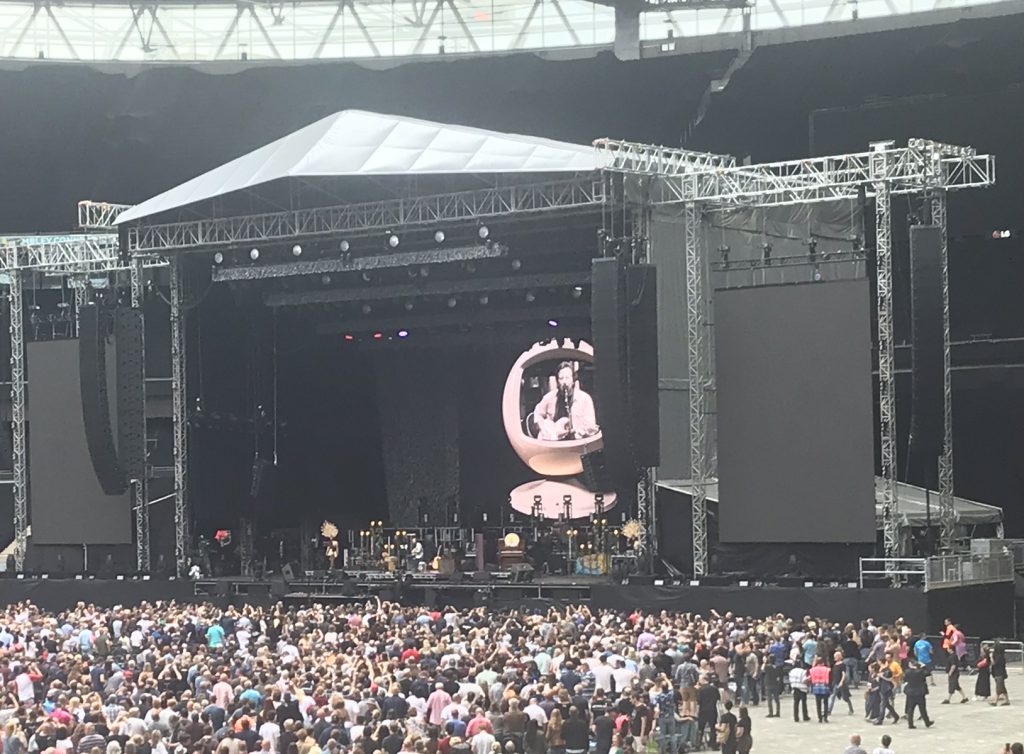 And speaking of the headliners…..

In between bands tonight they keep flashing what amounts to a rock n roll Hall Of Fame Scrapbook up on the big screen. Very few bands ever reach this level. And Pete Townshend recognises this, in one of his – many – speeches to the 60,000 or so that have found their way here. “I know how much you’ve sacrificed to even get into the building,” he offers.

Credit to the band too, because they haven’t come here to merely dial in the Greatest Hits with no effort (crikey, they don’t even do “My Generation”). Instead, they play an ambitious and sprawling set of over two and a half hours that, give or take the occasional misstep, is compelling throughout.

This – like their US shows – sees them paired with an orchestra for a good portion of the performance, which gives the likes of “Pinball Wizard” and “Who Are You” a different feeling than you might have expected, and with the first part heavy on “Tommy” numbers, there is an appropriately cinematic air to “1921” and “We’re Not Gonna Take It.”

Given the show was billed as “Moving On”, you could have been forgiven for thinking there was an air of finality, not so, as the contrary so and so’s knock out a new track. “Hero Ground Zero” is debuted here, and might need a listen or two more to hit home.

The orchestra disappear for a few. “Substitute” and “The Seeker” get them dancing in the isles (“it’s better when you know them, isn’t it” notes the irascible lead guitarist) the trouble is they follow this up with “Won’t Get Fooled Again”…..but an acoustic version, which does have a whiff of self-indulgence about it, although “Behind Blue Eyes” is given strings and is much, much better.

This heralds two things. First the return of the orchestra, but more than that a gear change. “The Real Me” is, well, a real highlight, Eddie Vedder duets on “The Godfather And The Punk” and “5:15” is just classic.

There is no doubt either – with all due respect to all the other members of the band, Daltrey included – who the star of this is, and Townshend proves it with a solo “Drowned” although in fairness to the singer, he gets his moment with a wonderful “Love Reign O’er Me”.

It’s a poignant night too, given the fact that Townshend’s guitar tech died just a couple of days before and his family are there to watch, but as “Baba O’Reilly” ends the set – slightly over curfew to Daltrey’s chagrin – there is a feeling of celebration. This is not a teenage wasteland anymore, this is a classic old rock group breathing life into its songs, and consequently itself. Not the visceral, rabble rousing of old, perhaps, but there’s a reason why no one asks who The Who are. And it was writ large throughout this.