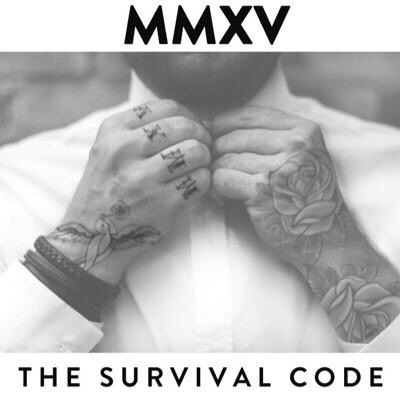 It scarcely seems believable now, but back in the mid to late 1990s the music NME covered wasn’t all shit. Granted, bits of it were always, shall we say, not quite to our tastes (and The Smiths and The Stone Roses, whether it’s 1994 or 2094, will always be godawful) but there was plenty of stuff in the pages that was also in Kerrang and Raw Magazines too.

Listening to “MMXV”, the debut record from London trio The Survival Code, it’s easy to wander back to those times, because that seems to be what they did. There are moments here that could have easily come from those albums like Feeder’s “Polythene” or Stereophonics “Word Gets Around.”

This is ambitious rock music, with half an eye, you suspect, on some festival tent somewhere, wowing other bands fans with their sound. On the frankly gloriously lush “Rat Race” TSC manage to out-Biffy Biffy Clyro, and if Simon Neil’s men had written it there’d be 15,000 fans a night chanting it back in an arena.

“This Feeling” continues the arena rock feel, with an intro that has echoes of The Manics “Motorcycle Emptiness” while “Gave It All” leaves the arenas behind and plants itself firmly in a stadium with Foo Fighters.

It’s meant as a compliment to say “MMXV” doesn’t sound like a debut record from a wide eyed bunch with passion, but unharnessed potential. Instead this is fully-formed stuff that knows exactly what it wants to achieve, “Centre Of The Universe” is bang on target, and both it’s chorus and guitar work from Gary soar most pleasingly.

The record can brood when it wants to, and “Ragin'” is angry at something, with the pulsing insistence of closing cut “Prisoner” hint at a different side to the band. Maybe they will be reveal it fully on future albums.

For now, though, they can be really very proud indeed of “MMVX.” On its huge opener “Never Let Go” the first verse starts with this musing: “I’ve been thinking a lot lately/but not getting much done.” If that, as you suspect, was the catalyst for this record, then something excellent came out of the apathy.