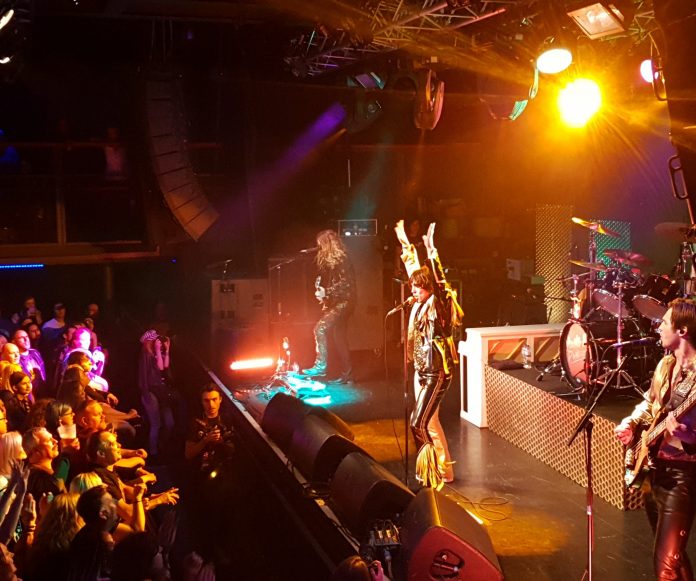 Think of those words while I explain why The Struts are the most important band in rock n roll right now.

And that, brothers and sisters, is this:

“We’ve been a band for a long time ladies and gentlemen…..” he shouts. “We’ve been dropped, we’ve been signed, we’ve had hits and we’ve had misses….”

And then, then the punchline.

“But we never stopped being The Struts, baby”

So, don’t you know who I think I am? I’ve always thought I was the singer in the biggest rock n roll band in the world, that’s who.

That line is actually the first thing he says tonight, as he trots out in an indescribable outfit, looking like a cross between Alice Cooper, Freddie Mercury and Noel Fieldling and sings “Primadonna Like Me”.

What follows is a 90 minute masterclass of pomp, ceremony and showmanship, from one of the absolute best live bands you’ve ever seen.

Don’t get me wrong, either, they’ve got great songs and a hell of a lot of talent, but they’ve got something else. They’ve got a magnetism, a presence, and they are resolutely and completely over the top.

“In Love With The Camera” (and don’t tell me it’s not about Spiller), and “Body Talks” are pure pop music and moreover they are unashamed about it too. Superbly crafted, and when Spiller sits at the piano for “One Night Only” then there isn’t anyone in here not thinking “yep, that’s Queen, mate”. But the point is if “they” don’t write them like this anymore, then The Struts do.

Their star is on the rise too. Spiller and brilliant guitarist Adam Slack play “Mary Go Round” acoustically, and with the lights off. The venue is lit up by mobile phone torches. You can only do this if you absolutely believe that the crowd will do it back. There’s never been a doubt.

The View’s Kyle Falconer was one of the support acts here, and he joins them for a cover of “Same Jeans” – which provides more proof actually, that The Struts could have been whatever they wanted to be.

It’s just what they are is a “proper” rock n roll band. Splitting the crowd into halves for a sing-off in “Where Did She Go” is the type of the thing that people don’t do anymore. No one told The Struts.

Spiller sings “Somebody New” solo, then “Ashes (Part 2)” is as bombastic as you like, and “Could Have Been Me” is a crescendo and a half. But what it highlights is that it IS them. It really is.

Leicester Academy is not, lets be real, Madison Square Garden. But tonight it is. That’s the point. And The Struts are heading to arenas.

They always knew what they thought they were, and slowly but surely, everyone else is coming on board.

Previous article
TIME FOR CHRISTOPHER
Next article
BAND OF THE DAY: MAGIC KINGDOM