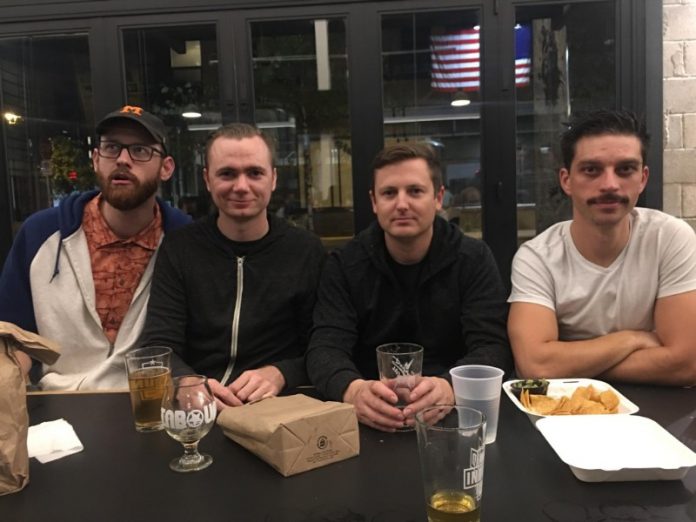 Download for FREE direct from bandcamp in your choice of hi-def wav and mp3 formats today: “More Delusions”.

“This is a song about hope – pure and simple. Just kidding. Like most of our songs it’s about trying to figure out what the hell to do with your life before burning out. Some say that it was too good to fit on Stick to the Plan. Others say that it was left out because they don’t make 13 inch records. Either way, it’s one of those good time groovin’ songs all the kids are boppin’ to nowadays.”
– The Right Here

We’re pleased to bring you the premiere of The Right Here’s new single
“More Delusions”. The track is taken from the band’s
forthcoming album ‘Another Round’, which is scheduled to be released through Rum Bar Records.

Straight out of (one of) those beloved Twin Cities, The Right Here has been doling out their rowdy brand of rock’n’roll since 2010.

Embracing a style similar, and kindred to beloved bands such as Lucero, Drag the River, Old 97’s, Avail, The Bottle Rockets, Red City Radio, and home town brothers Nato Coles and the Blue Diamond Band, and The Replacements.

The Right Here have created their own sound that fits in perfectly with the current punk rock’n’roll scene that’s happening in Minneapolis right now. A combination of thundering, foot stomping, barn burners, punk, blue collar rock, and alt-country that will make your music loving heart pitter-patter with excitement. Soak on up their somber, hauntingly, beautiful suds, and heart-felt stunners, finding yourself immersed in true, pure, rock and roll from the Heartland.

The Right Here will hold their ‘Another Round’ album release show on Saturday, May 12th at The Terminal Bar in Minneapolis MN: Facebook Event

The Right Here commented on the album: “I didn’t know you’ve been a band long enough to have b-sides” – a “fan”. Joke’s on that guy! We have! This is a collection of acoustic songs, covers, and b-sides. The acoustic songs include a few stripped-down versions of Stick to the Plan songs and some tunes that will become full-band rippers on our next record. We’re finally releasing our cover of the Rolling Stone’s, “Dead Flowers” on CD. We’re also paying tribute to David Bowie on this release with our take on “Modern Love.” You might remember “Buy Me A Round” from our first album, “All Herky Jerky.” We gave it the full-band treatment for this album, and we’re also including “More Delusions,” which almost made the cut for “Stick to the Plan.” We hope you enjoy this collection! Stay tuned for a new full length record in 2019!