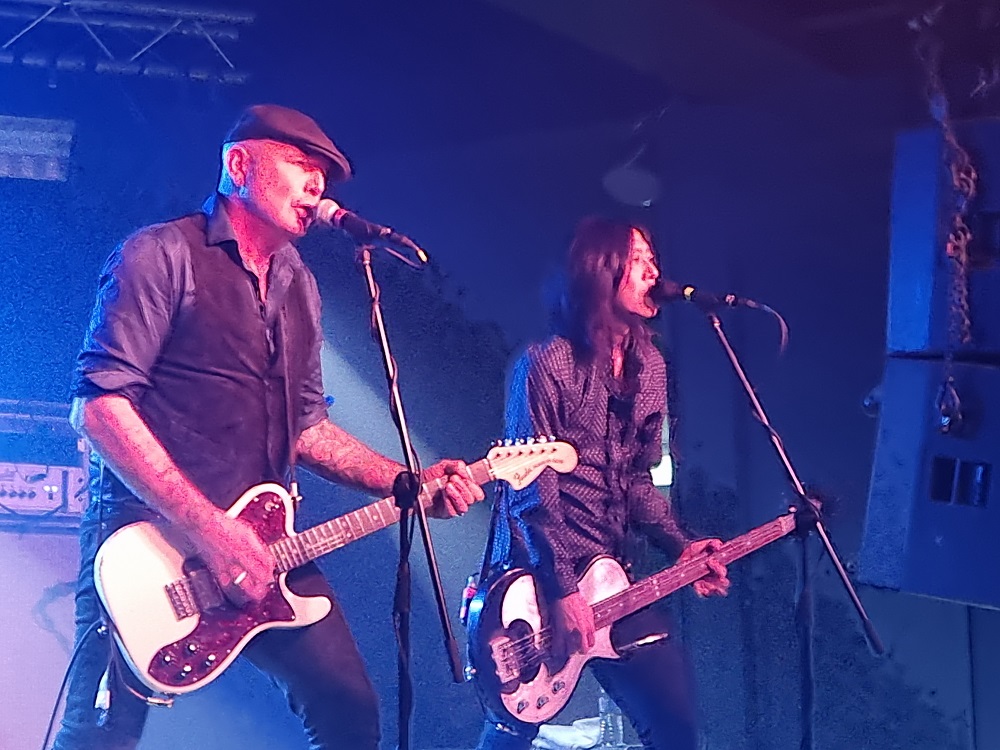 “We’re staying downtown tonight at the Easy Hotel”, says Eugene Butcher, singer with Desperate Measures for 30 odd years. MV isn’t exactly certain where “Downtown Birmingham” is, but its not here, in the Castle And Falcon, a scruffy pub in a scruffy street in the scruffy outskirts of the second city. But goodness it suits this punk rock, where dirt under the fingernails is almost a requirement. With a brilliant EP, “Rinsed”, just out – and its lead track “Scars And Memories” is superb here – its tempting to just see them as a forward looking outfit, but older stuff like “Phoney Heaven” is fresh with this new line up of the band. “Rich-Tual” is a personal favourite in truth and the line that Butcher spits out about being “a soldier of the working class” is perfect for the music that, if it were American, would be called “blue collar”. What is interesting, though, is when they play “1984” and bring forward some Killing Joke flavours and they are almost a totally different band. And even if we are honest,  the venue isn’t packed, then the energy that Butcher and the rest provide more than carries the set. As it ends with “I Wanna Be Your Dog” then its clear too, that these are just fans and Desperate Measures are just loving being back onstage. The Easy Hotel might be in for quite a night.

There’s some joke here somewhere about Punk never dying. Tom Spencer, a kind of cockney rogue that is part Ray Winstone and part rock n roller, fixes us with a grin and says “there’s defibrators backstage to get Cookie back out, he’s coming….”

When “Cookie” (and if you need me to explain who he is, then Google is your mate) does, for the encore, of “(Let Me Be Your) Steppin’ Stone” there’s a communal feel of fun in the room and that’s always the case with the band.

And it’s a band with a new album too, and there’s something punk rock about the fact that “Snafu” isn’t on any streaming services and doesn’t appear on sale anywhere except on the merch table. As a result the new songs are pretty much being heard for the first time. Some of them are fabulous too, the record’s opening track “Easily Led” and “Strike Me Baby” (“not bad for a new one, huh?” says Spencer) in particular are impressive.

Indeed, the band have a collection of superb songs. “Payola” that starts the set, “Going Going Gone” and the rest, are low-slung rock n roll. Absolutely pure in its filth too, and still ready to fight you in the street.

Bass player Toshi – who gets bonus points for being in The Wildhearts for a bit – brings some real groove, and Spencer, who is a fine frontman, is an excellent guitarist too forming a partnership with Rich James. This line up of the band has some real skill to go with the obvious pedigree behind the kit.

There are some real highlights too – “Rewind” which feels new, I guess and a brilliant “123” are amongst them. Indeed, the latter sees Eugene Butcher front and centre in the with the fans, and in truth, it’s the first time its really felt like a viscerally exciting show, as opposed to a really good one.

There’s one of the new ones, though, that seems to mean more. “M’Ashes” a song of brotherhood written about Paul Cook (if there was anyone that didn’t know who “Cookie” was you do now) and Steve Jones taking Jones’ mothers ashes for scattering. And that seems to encapsulate the band, there’s a sense of a bond amongst them all, a camaraderie that seems to not just bind them together here, but throughout their music.

Which is precisely why it matters that these bands are back onstage, and why defibrillators will never be needed to keep punk rock alive.