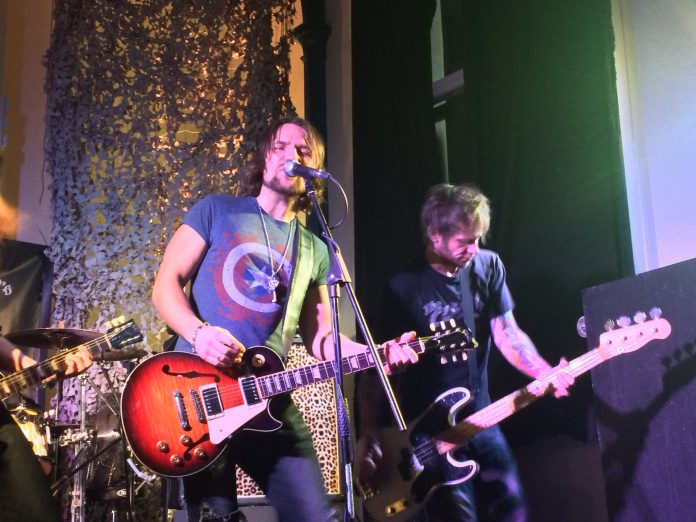 The next big thing in arena rock? The New Roses make it to England

Sometimes the music industry baffles. The constant battle to be seen in an ever crowded market and all that. But really, look at some of the bands that are playing in arenas and on the front covers of the magazines then glance at those who are fighting on elsewhere and ask yourself why.

Exhibit A for the prosecution: The New Roses.

Tonight marks just the second UK show in the history of the band. The Frankfurters announced themselves with the fine 2013 album “Without A Trace” and they followed that up with the even better “Dead Man’s Voice” in 2016.

To say they have everything they need is to state the obvious. Straight up, swaggering rock n roll with a country hint and a dollop of Sunset Strip attitude in between, The New Roses should – and would if there was any justice on this planet rock – be the next big thing.

They seem to have the confident air of a gang (and that’s very much what they are) that understands this too. Starting with the insanely catchy “Thirsty” rather proves it. With other bands this would be the encore, never mind the opener and it’s far from the only one.

Support tonight and seemingly determined to pack as much into their 45 minutes – plus make as many friends – as possible, TNR race through a set that packs in most of the highlights of their two albums.

“Gimme Your Love”, the turbocharged “Long Way To Go”, and the sheer hedonism of “Devil’s Toys” represent “….Trace”, while the glorious country blues stomp of “Dead Man’s Voice” does the same for that collection.

The band themselves have some undefined star quality too. Frontman Timmy Rough has a mischievous glint in his eye and fellow guitarist Norman Bites and Bass Player Hardy ably abet him in looking for trouble.

Capable of both working a crowd and playing huge ballads like “For A While” which, if it was an Aerosmith song, would have put another wing on Steven and Joe’s houses, this is a band that most surely has it.

Finishing with the enormous title track from their debut – which found its way onto the Sons Of Anarchy compilation – it would be wonderful to think this heralded some love affair with The New Roses in the U.K. Time will tell, but tonight is job done and The New Roses moved a little closer to being arena rock’s new kings.