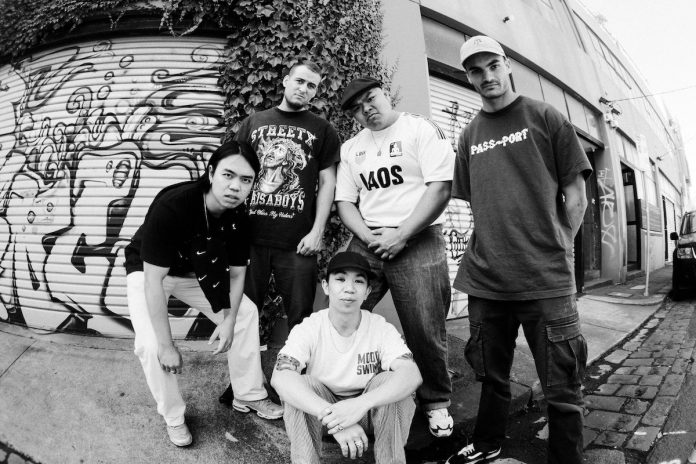 Already emerging as a leader from the growing Australian hardcore scene, Sydney’s relatively new group, SPEED have announced their signing to Flatspot Records with the release of their upcoming EP, 2020 Flex, due out June 19th in partnership with Last Ride Records. To celebrate the international occasion, the band has shared the pummeling lead single, “A Dumb Dog Gets Flogged” via a premiere with BrooklynVegan. Using the metaphor of a “dumb dog” the band warns of dangers of idle speech, stressing the importance of practicing what one preaches through thundering to-the-point hardcore. These messages are deeply ingrained in the SPEED’s pursuit of progress and rejection of complacency. “A Dumb Dog Gets Flogged” is available to stream on Bandcamp or Spotify and pre-orders for 2020 Flex are available from Flatspot Records here on blue flexi vinyl and from Last Ride Records in Australia here on red flexi vinyl. SPEED, Flatspot Records, and Last Ride Records have also announced their plans to donate all webstore profits from the release with 50% going to The Bail Project in the US and 50% going to Sisters Inside in Australia.

“This song was born in reaction to the failed leadership of our government during the 2019-2020 Australian bushfires. Empathy and compassion should always be the premise for meaningful action. We’re super humbled to have Flatspot Records (US) team up with Last Ride (AU) on this release to help open our Australian doors to the world.”

Formed in 2019, Sydney’s SPEED is an injection of vital energy into the hardcore scenes of both Australia and the world at large with a clear-cut mission: to positively grow the hardcore scene by challenging cultural norms, embracing diversity, and promoting compassion across political and racial lines. The majority of SPEED’s members are of Southeast Asian descent; drawing strength from its members diverse cultural perspectives, SPEED makes it a point to stand up not only against racism and xenophobia but also the toxic masculinity and gender prejudices that have crept their way into hardcore. Working closely with local streetwear brands and musical crews across genres as well as their own Forge Ahead Podcast that highlights members of their community, SPEED embodies the messages of inclusivity and cultural unity that are as foundational to hardcore as the music ever was.

Returning with the follow-up to their 2019 debut demo on Last Ride Records, SPEED presents two new tracks of grooving and grinding hardcore, set to be released on flexi vinyl through Last Ride Records in Australia and Flatspot Records everywhere else. In spite of their recent arrival onto the scene, SPEED has already shared the stage with a diverse list of bands, ranging from hardcore giants Terror to local hip-hop acts like Posseshot and Haz. As the world seems to grind to a halt and individuals become more isolated than ever before, SPEED rejects the alienation and chooses to march confidently into our new future with a message of unity, solidarity, and progress for all who fight for it.