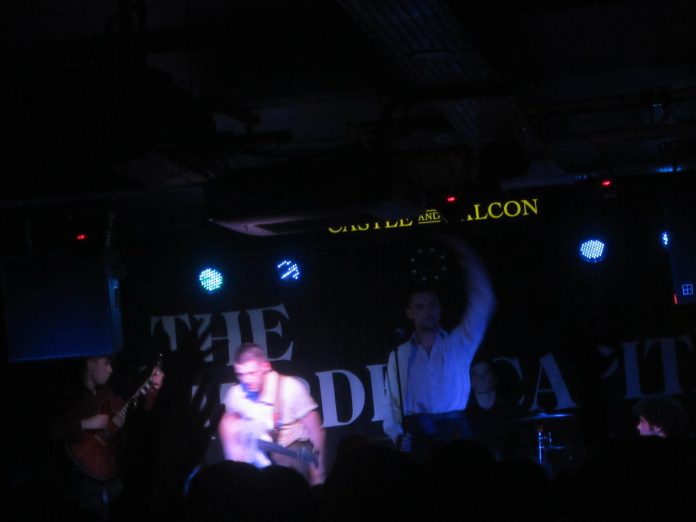 I was really looking forward to tonight`s gig on this young Dublin band`s `When I Have Fears UK Tour` to promote the release of their impressive debut album of the same name.

There has been an enormous amount of positive press for not only the album but their live shows. The guys arrive on stage all suited and booted to rapturous applause from this sold out audience. They open with `Slowdance I` which bleeds into `Slowdance II` with the former having minimal lyrics and the latter an entrancing musical backdrop.

`On Twisted Ground` follows, a track written in the aftermath of their friend having taken their own life. A strummed bass line and James`s McGovern`s haunting vocals add a real pathos to the deeply moving narrative of this song and James almost breaks down towards the end of his touching conveyance of this. A track that builds to a musical cacophony follows with `Love Love Love` which seems to be a tale of a doomed romance. The initially quietly almost distantly shared vocals become almost oral chants, slightly threatening, slightly disturbing but a wonderful way of expressing the emotional pain felt.

The twin guitars of Damien Tuit and Cathal Roper almost vie for attention on `For Everything` with Gabriel Paschal Blake`s throbbing bass and Diarmuid Brennan`s sublime drumming it reminded me slightly of Bauhaus`s `In The Flat Field` It has a wonderful mix of aggression and beauty with slightly questioning lyrics “Not at all, Not for everything, it’s not for everything at all, not for everyone, it’s not for anyone at all“

The rhythmic quite tribal `Green & Blue` and fast paced assault of `Don’t Cling to Life`, a song questioning what`s after death are blasted out before `More Is Less` has the crowd jumping up and down and shouting, singing along with the chorus.

The night concludes with the driving attack of `Feeling Fades` as the band lay down their instruments and hug each other in a “job well done” mode as they depart the stage.

It`ll be interesting to see how the band progress as their debut album come out of personal experiences from the sudden bereavement of a dear friend.

But this was a cracking gig from a group that can certainly deliver live so there`s a lot to look forward to.