The Mighty Swine Are The Last Men Standing 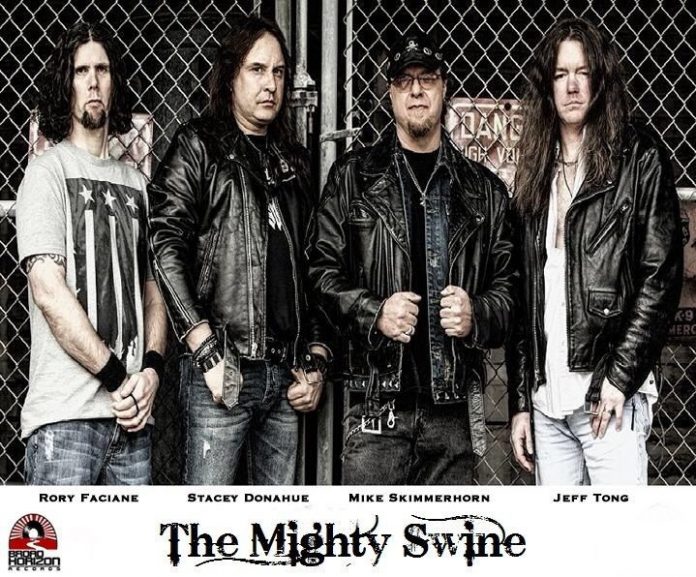 The Mighty Swine are a progressive, classic hard rock / metal band with roots in the Midwest U.S.A.

Their self titled first release, aka: Everlast, received modest airplay for the single, Layin’ Down the Law, and earned them a spot on Hard Rock Nights’ Best of 2009 Playlist.

The band toured heavily in 2009 & 2010 and provided support for Godsmack, FFDP, Skid Row, Dokken, L.A. Guns, Adler’s Appetite, & Texas Hippie Coalition before taking a break in 2011 to focus on writing material for their second release.

In 2012 The Mighty Swine released Lust / Pagan Holiday along with their first professionally shot video. The video for Lust debuted at #1 on Roxwel.com’s Rock AND Metal Charts and stayed there for 13 weeks. It has over 25,000 views on YouTube and earned the band a C.E.A. (Cincinnati Entertainment Award) nomination for Best Hard Rock Act. In June 2012 it was selected for Video of the Week by Artist Pro Spotlight.

The Mighty Swine went on hiatus in 2013 while Bassist / Vocalist Mike Skimmerhorn recorded Surrender to No One with his other band, CHASTAIN. After working with Chastain again, Mike knew he wanted to pursue a more aggressive sound on the next Swine release and he quickly sought out new band members, adding Stacey Donahue and Jeff Tong on Guitars, and Rory Faciane on Drums.

Teaming up with Rob Nadler at Fat Track Studio in Cincinnati, the band recorded 9 new songs along with a remake of the Judas Priest classic, Hell Bent for Leather. It also features the original demo of Pool of Emptiness (P.O.E.) that Mike first brought to the label in 2009.

Last Man Standing was released on Broad Horizon Records May 20, 2014 along with a new video for the title track which was shot & edited by Nikk Hearn (RUSH – Time Machine DVD). A second single, Two Graves is set for a July 1 release along with video.

The Mighty Swine just completed an 11 city tour with the Legendary DORO in October, performed at Dirtfest with Killswitch Engage, Nonpoint, more and are out on the road with Pink Velvet Krush in support of their latest release, Last Man Standing.

This is The Mighty Swine’s third release on Broad Horizon Records and marks a return to Mike Skimmerhorn’s (Chastain /CJSS) Metal Roots with an all new band.

Learn how to get your music noticed at ReverbNation.com
Previous article
Beholder To Play Birmingham Club Show
Next article
Broken Chords – Rock And Stone EP