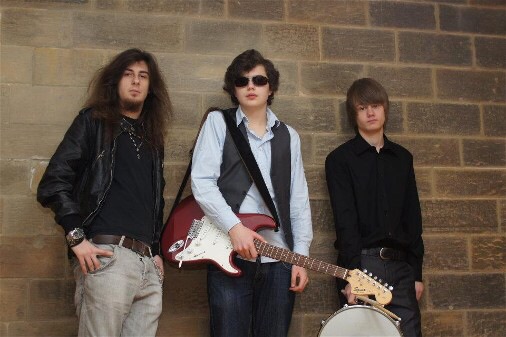 In Britain, we are blessed with some wonderful blues three-pieces. The Mentulls are most definitely one of them. Here, in the first of a series of articles with the band, they tell us all about their new album.

It is a great moment when you get to a venue when the support band is midway through a set and that band is so jaw-droppingly good that you can’t wait to see them again.

That happened to MVM a couple of years ago when we turned up to watch Southern Rockers Skinny Molly. The band in question didn’t look very old but the guitarist just let rip with a solo like you wouldn’t believe.

The band was The Mentulls, that fantastic guitarist was Andrew Pipe and MVM was lucky enough to catch up with the three piece – completed Andrew’s brother Jamie on keyboards and Nick Colman on drums – a few weeks ago at their blistering show in Birmingham.

The trio are currently in the recording studio crafting the follow up to their brilliant “Time Flies” record from 2012.

For this new one they have enlisted Wayne Proctor of King King as Producer and, says Andrew, he’s been great to work with: “Wayne has a wealth of experience and we’ve learnt a lot from him,” he explains.

Life in the studio has suited the friendly, unassuming band and Jamie laughs: “It’s in a tiny little place in Nottinghamshire, there’s nothing except the studio a coffee shop and a burger bar. There’s no distractions, it’s great!”

Often tagged as a straight up Blues band, there is actually a lot of 1970s rock in the band’s sound. Jamie, for example speaks of his love for former touring partners Wishbone Ash, and the three confirm there will be no major departures this time around: “Its sounding good,” says Andrew. “It’s the best album we can make right now and it sounds like us.

There will be much more with the band to come in the run up to the album release. For now, check out their wonderful tribute to Jack Bruce.