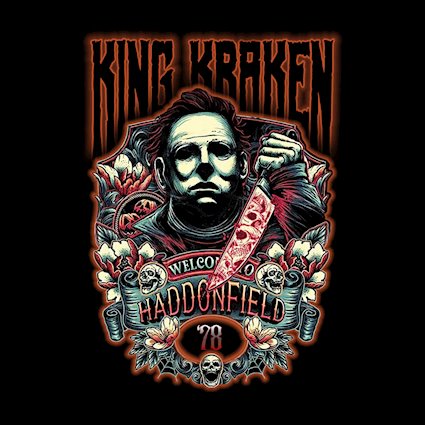 Recorded at Long Wave Studios and produced, mixed and mastered by Romesh Dodangoda (Those Damn Crows, Inglorious, Motorhead), this is King Kraken’s lead single from their upcoming debut album, ‘MCLXXX’.

Inspired by monstrous fictitious villains of the highest order, ‘Haddonfield ’78’s chilling music video leaves no stone unturned as its storyline reveals the dark undertones of the lyrics. “Being a huge horror fan I knew I wanted to write about fictional serial killers (I’ve always veered towards movies as opposed to true crime)”, reveals lyricist and King Kraken vocalist Mark Donoghue. “I was conscious not to mention the film or the character in the lyrics so that upon hearing it, the listener could decide for themselves who the song is about. The title came some weeks later and therefore some lyrics adapted, however, the only reference directly to the film would be Michael’s knife in the line ‘shining silver is the last thing you’ll see today’. However, l since titling the song there is no question as to what the track is about.”, Donoghue concludes.

With the album title alone bearing enough weight to see off Titans in their droves (MCLXXX is the year that the mythological creature, ‘The Kraken’, was first recorded as being seen in the flesh), King Kraken delivers on the promise of their 2020 debut EP.

The result is a heavy, groove orientated, melodic collection of songs that takes the listener on a profound journey through a multitude of texture and inspiration. Check out the cephalopod-like sonics of ‘Green Terror’ , Veins’, and ‘Man Made Monster’, alongside the undeniable terrifying Halloween tribute of new single ‘Haddonfield ’78’. With the one, two turn of the screw album closers, ‘Chaos Engine’ and ‘Castle of Bone’, the Welsh warriors relish every bite of this new 10 track long player and it’s difficult not to bang your head to.

‘MCLXXX’ wildly elaborate collection of songs has inspiration from a famous list of horror and sci-fi movies that had an early impact on the band’s vocalist and main wordsmith, Mark Donoghue. The new LP is a mixing bowl of hefty reprehensible rhythm guitars, battering yet eloquent drum patterns, pounding bass lines, raw and robust vocals, and acrobatic guitar solos. Be in no doubt true believers, there’s a monster musical mash here that will excite and infuse the listener with a retrospective sonic familiarity, but with a fresh bite that will take head’s off. There’s everything from crushing heavy metal to more measured, blues-influenced hard rock, all served with an originality that is both old school and refreshingly contemporary.

Intriguing, tantalising and provocative, in equal measure, ‘MCLXXX’ will set the bar high for new metal releases in 2023. King Kraken has delivered one of the best metal underground debut albums heard in recent times and it won’t go unnoticed by the metal masses. Ones to watch and go see live!