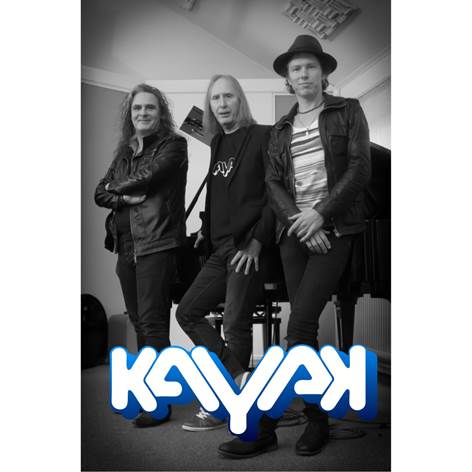 Legendary Dutch progressive rock band KAYAK has signed a worldwide deal with InsideOutMusic! The band’s seventeenth studio album is entitled “Seventeen” and is set for release on January 12th, 2018.

Currently being busy mixing “Seventeen”, the band’s mastermind Ton Scherpenzeel comments: “KAYAK are excited about signing to IOM, and are looking forward to a long lasting and successful collaboration. The combination of the band with an almost complete new line up, and a new record company seems very promising and will hopefully open new doors for us!”

Originally, the album’s release was already announced for October 2017 and a presale is available via KAYAK’s official website. It remains valid but due to the new record deal, these pre-orders will be fulfilled in early 2018 when InsideOutMusic officially releases “Seventeen”.

KAYAK was founded in 1972 by keyboardist/composer Ton Scherpenzeel and drummer/composer Pim Koopman, along with lead singer Max Werner, guitarist Johan Slager and bass player Cees van Leeuwen. Often compared to contemporaries like Yes and Focus, the band quickly developed their own style of symphonic rock that was rather concentrating on songs than elaborate solos and long instrumental passages while KAYAK never shied away from including epic, longer tracks and captivating, dramatic arrangements. Throughout the years, KAYAK has seen many line-up changes with Ton Scherpenzeel now being the only original member and leader of the band.

KAYAK achieved tremendous success from the late 70’s onwards, cracking the US top 60 charts with the single ‘Want You To Be Mine’ in 1978, holding number #1 in the Dutch charts for several weeks with the Platin awarded “Phantom Of The Night” album released in 1979 with its single ‘Ruthless Queen’ reaching #5 on the Dutch single charts. This first era of KAYAK ended after eight albums in 1981. All members went their own way, Ton Scherpenzeel for instance played and recorded with groups like Earth & Fire and Camel, whereas former singer/drummer Max Werner scored a number #2 hit in Germany with ‘Rain In May’ from his second solo record “Seasons” already in 1981.

But the story of KAYAK was not over.

Fast forward to 1999: after an 18 year absence, Ton Scherpenzeel and Pim Koopman restarted KAYAK, with Max Werner again taking over lead vocals. This second era was marked by an explosive, new creativity making the band’s output exceed the early days. In 2009, disaster struck when Koopman died of heart failure in the middle of the “Letters from Utopia” tour. In 2011, the band had overcome this big loss and returned to the stage and with a new album. A couple of years later KAYAK completed their rock opera trilogy “Merlin”, “Nostradamus” and “Cleopatra” but when lead singers Cindy Oudshoorn and Edward Reekers left the band shortly after, Scherpenzeel realized he had to completely renew the line up in order to maintain his creativity as well as keep the band going.

Now, with singer Bart Schwertmann and guitarist Marcel Singor joining Ton Scherpenzeel as the band’s creative core and additional members Kristoffer Gildenlöw (bass / ex Pain Of Salvation) and Collin Leijenaar (drums / Affector, Neal Morse, Dave Bainbridge), a reborn KAYAK once again proves that the band’s name – though chosen randomly back in 1972 – is as appropriate as ever. Just when everyone expects the boat to sink, it miraculously resurfaces and sails on.

Further information on the new album “Seventeen”, which also features a guest appearance by Camel guitar player Andy Latimer, will be revealed soon!

From left to right: