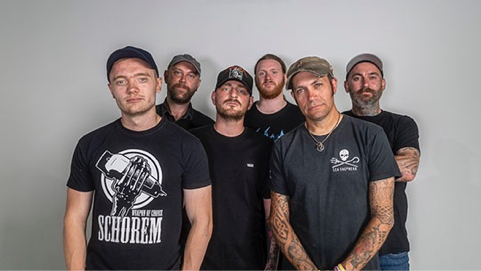 Today Ferocious Dog proudly release their new album ‘The Hope‘ on vinyl, through Graphite Records. The album is available on limited edition green vinyl from the band’s store and marbled vinyl from independent retailers, exclusively with a signed print from Recordstore; https://ffm.to/thehope  The album is also available on traditional black vinyl.

Upon initial release in October, The Hope debuted at Number One on the Official UK & Ireland Folk Album Charts  and entered the National Album charts at Number 31.

“We are so proud that ‘The Hope’ has become the first Ferocious Dog album to enter the UK charts! Thank you to each and every one of you that supported the band and the release and helped us get this amazing result! We’re still on tour so come out if you can and celebrate with us. Once again thanks to all Hell Hounds for their support – together we can achieve great things!” exclaim Ferocious Dog. The Hope, includes the title track, released as a single (https://www.youtube.com/watch?v=HpnseurMhQk )to coincide with World Mental Health day and the previous singles: ‘Broken Soldier‘ and ‘Pentrich Rising‘.

The Hope flows irresistibly through tales of historical observations, to biting commentary on the plights facing the world today.  The songs follow a rollercoaster of pace and sentiment which will have you wanting to mosh one moment before having a moment to contemplate.

The Hope carries on in the strong tradition of Ferocious Dog albums, with thought provoking and politically charged lyrics, seamlessly combining with dynamic and eclectic music. A great follow-up to the album Fake News & Propaganda – Ferocious Dog seem to have the knack of evolving their sound enough to pique your interest, without losing any of the sound or attitude that made you fall in love with them in the first place.

To coincide with the release of The Hope Ferocious Dog’s have been undertaking a 24 date tour which concludes with a show at the Leadmill in Sheffield on Sunday 4th December.

Ferocious Dog will continue to tour throughout 2022, with 6 UK headline shows already confirmed, including a charity gig supporting street children in Nairobi, Kenya –  ‘Giving Real Hope to Rhyco’ on Saturday 23rd January. Plus, festival appearances including The Bearded Theory in May and the Bloodstock and Rebellion festivals in August. There will be more shows announced soon.