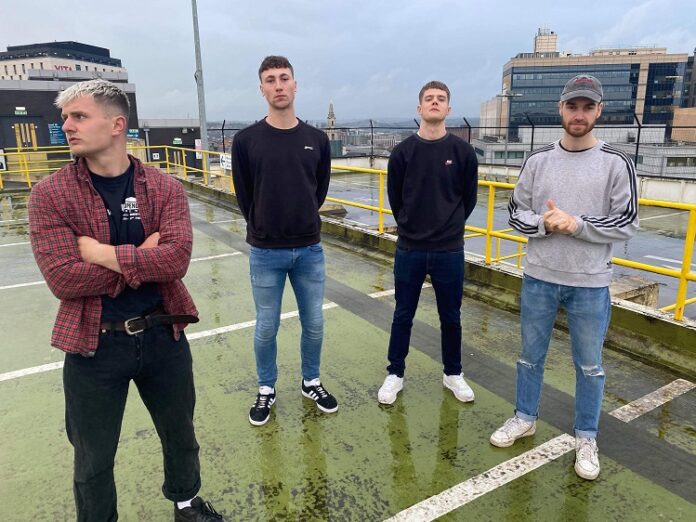 9/10 is the third instalment from THE TOWN HALL SESSION, the forthcoming EP from FUDGE. The EP incorporates the same feverishly infectious energy for which the band have become synonymous, whilst bringing more variety and experimentation. These elements are appropriated for the classic FUDGE. heavy indie rock vibe that they exude so effortlessly; it’s chaos but, for anyone who doesn’t already know, chaos is the band’s bread and butter.

That chaos rings true through the vocals, with Cam writing and delivering perhaps his most experiential lyrics to date, grounded in the heart of Hyde Park in Leeds where temptation leads you down unexpected roads, in the most predictable and cyclical of ways, into formulaic turmoil. Everyone knows the kind of night where you aren’t really yourself but there’s something great about that. The song is for those moments, and in honour of those moments.

The band pride themselves on their live performance which, repeatedly, is eulogised by those who find themselves caught within the chaos of a FUDGE. gig. Their epic live performance has now met head on with the majestic and iconic venue in which they recorded THE TOWN HALL SESSION. Unfazed by the grandeur of the building, the boys and the team captured their hectic performance in stark polarity to the splendour of the venue. You wouldn’t think to pair the two, but it works.

Prior to the onset of Covid-19, FUDGE. had geared up for a busy 2020 by gigging with the likes Strange Bones and Kid Kapichi, as well as playing a sold-out headline show for the release of their acclaimed third single Hugger-Mugger. Their 2019 festival schedule, which saw them play Leeds and Reading and Bingley Weekender, was set to be enhanced with further festival appearances at Live at Leeds and The Great Escape, while their previous releases received huge critical acclaim and were showcased on BBC Introducing, BBC 6 Music and many more.

CAM | vocals: “9/10 is the only song on the EP I feel like I wrote specifically about myself. It represents the relationship I once had with ‘the sesh’ (as cringy as that sounds) and day to day life. Listen to it, some of you will relate, some of you won’t, that’s sound, take what you will; it’s all fun and games until someone poos themselves.”

OTTO | guitar: “In contrast to the previous song, this is what happens when I get complete free rein and have no parameters when I write. This song has groove, hip hop influences, heavy yet melodic bits and an awkward feel at times. The ending is essentially Angus and I sat in a room going, ‘Let’s make this song really hard to play and really hard for people to try and learn’. So, I dare you to try and learn it and send us a video. I bet you’ll get it wrong!”

ANGUS | drums: “This one is stupid. It’s mostly in 4/4 but we think we’re being clever by making it sound anything but. In fact, it’s all by accident and we just wanted to write a nonsensical show- off song. This is the result. Cam impressively managed to put vocals to it but there is more space for instrumental limelight here. In my opinion, it has the potential to be something more, or something totally different to what we played in this version. There is so much space instrumentally that anyone could take it, put their own spin on it and make something totally new without destroying it. To put it simply, I have great fun playing this one, it makes me clench my teeth.”