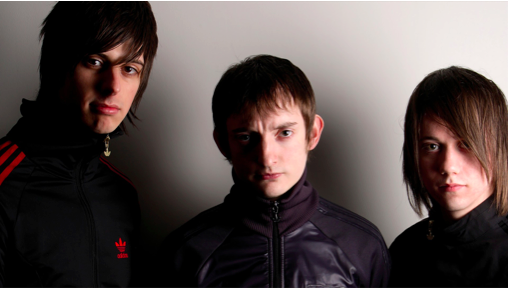 In 2007, The Enemy emerged from their working class roots in Coventry to become one of the biggest new bands around. Their debut album ‘We’ll Live And Die In These Towns’ went straight to #1 and would later be certified Platinum in recognition of over 300,000 sales. The trio would ultimately land another two Top 10 albums, two Top 10 singles, three major awards (from NME, Q and XFM), shows with The Rolling Stones, The Sex Pistols, Oasis, The Killers, Kasabian, Bon Jovi, Manic Street Preachers and Stereophonics, and even complete a special rooftop performance at Wembley Stadium ahead of the FA Cup Final.

Now The Enemy are embarking upon a major UK reunion tour to mark the 15th anniversary of the release of their debut album. The tour features the band’s original and only line-up – Tom Clarke (vocals/guitar), Andy Hopkins (bass) and Liam Watts (drums) – and represents the first chance for fans to see the band in action since they played three sold-out farewell shows in their hometown back in 2016.

The Enemy commented, “This year marks the 15th anniversary of ‘We’ll Live And Die In These Towns’ and six years since we all played together. Over the last decade-and-a-half we’ve watched fans begin to really treasure those songs and we’re asked on an almost daily basis if there is any chance of the three of us getting back on stage together, so we know how much this will mean to the fans. What we weren’t expecting was quite how excited we would all be to play together again. There’s a lot of anticipation and excitement from the three of us to go out and play, just us, the songs and the fans. We really can’t wait!”

The Enemy recently shared their experiences from their rehearsals together on social media. Tom noted how they immediately blasted into ‘Aggro’ “as though the last time we played was yesterday.” Liam admitted he hadn’t even played the drums in over five years but immediately got into the groove, while Andy captured their excitement the best: “I can’t wait to play the shows for everyone, that’s the thing I’ve missed the most. We always put our heart and soul into our live shows and this tour will be no different. Let’s get on the road!”

‘We’ll Live And Die In These Towns’ featured the Top 10 singles ‘Had Enough’ and ‘Away From Here’. NME’s review described it as being “blisteringly frank, frequently inspiring, consistently brilliant and, most importantly of all, the only way out they know” while also noting their “Weller-esque teeth-gnashing” and “enormous Oasis-shaped heart.”

It was followed by another two hit records: 2009’s ‘Music For The People’ (#2) and 2012’s ‘Streets In The Sky’ (#9), plus their final album‘It’s Automatic’ from 2015. They’ve continued to command a following in recent years, with tracks from ‘We’ll Live And Die…’ amassing almost 40 million streams at Spotify alone, along with strong ticket sales for Tom Clarke’s solo shows.

Remaining tickets for the shows listed below are available HERE: