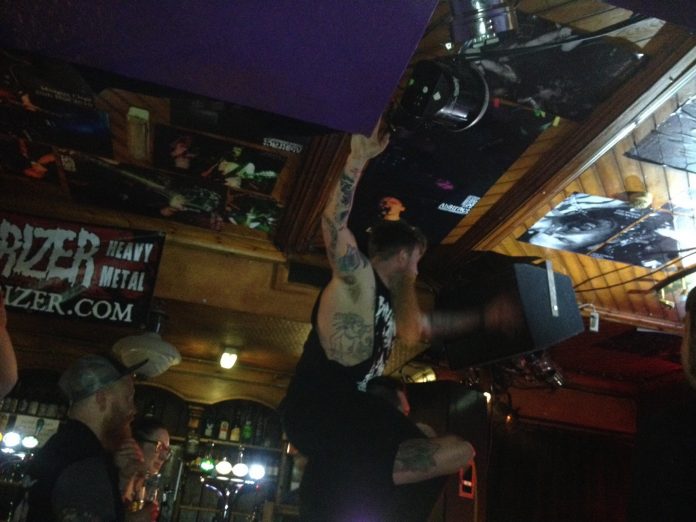 Of all the things you expect Vexxen singer James Walker to say “let’s get funky” isn’t uppermost in the betting. The hardcore/thrash/death metal crossover they deal in is about as far removed from funk as you can imagine. But then, they don’t look they sound either, so maybe the youthful collective just like confounding expectations. The band are building quite a reputation and their incendiary performance when they opened for Left For Red recently was clearly no fluke as they repeat the dose here. The breakdowns are huge, the riffs bigger and there is real potential here, as closing song “Have You Met My Brother Seth?” proves. Like we said a few months ago, keep an eye on Vexxen.

Their fellow local lads Opheon have got the harsh verse/melodic chorus thing down pretty well and, when mixed with the pretty catchy hooks here, it’s quite the brew. At their best there are echoes of Malefice here, and things slam where they should slam, while lead man Liam O’Sullivan does a fine job along with his vocals. All their ideas come together best perhaps on “The Distance” which begins slowly, throws in some old school metal and then some real aggression to finish. That is far from being alone in being a fine song, however and “A Portrait Of Self Hate” matches its title, while “We Are One” races around and has urgent business to take care of.

Maybe we should expect as much from someone with a Baby Godzilla tshirt on, but Tussk singer Sean has an interesting approach to things. The audience at Scruffys is largely at the back of the room so he goes to Scruffys. He and bass man Matt are from the school of thought that – if we may paraphrase proper culture and that – all the floor’s a stage and all the audience are players. The Stoke five piece’s set is played on tables, on the bar, on a mates shoulders, and one occasion Matt is lifted up and walked round for a bit. It is glorious chaos, as befits a band who says on their Facebook bio: “We play music at an acceptable speed and volume. Fast and loud.” Amongst it all though, there are brilliant and brutal songs like “Collosoraptor,” “Missionary Impossible” and “Jazz Hammer,” which sound like Every Time I Die would if they were from Staffordshire and filled up on Bacon and Cheese Oatcakes. New song “Hard Case” is probably heavier, faster and even more in your face than even the rest and their half hour is a jaw dropping thing. Not every band could do this, not every band would want to, but Tussk are incredible at it.

Perhaps it’s because this gig is in the week that Faith No More made such a return to the fray, but listening to Essex mob The Droppers Neck here it’s impossible not to think about Mike Patton and the boys. There’s the same deep, rich tones – almost Nick Cave or Iggy Pop like – from singer Lloyd Matthews, that turn into a scream at a moments notice, and the same anything can happen feel about the music. When Matthews screams “are you ready to go over the top?” You feel compelled to follow. He prowls Scruffys as the wave of angular sound on stage envelops the room. “Abrasive” is exactly that, pummelling hard and scraping like sandpaper to the nether regions. “Monster” crushes and “I Am The Law” rolls along with a mighty groove. The band have a new EP out in July and “Stutter” from it is a menacing offering from it. As they end with “200 Volts” the unshakable thought remains: As they teeter on the brink of so many genres, if FNM had sex with a punk band then the offspring would make a noise like The Droppers Neck.

Sunday night shows – as a couple of bands here observed – are a tricky affair. Best then, to do what people did at this gig instead: Kick the living crap out of everyone that’s here and worry about the consequences tomorrow. That job was very much done. More proof that the unsigned music scene is burgeoning with talent right now.