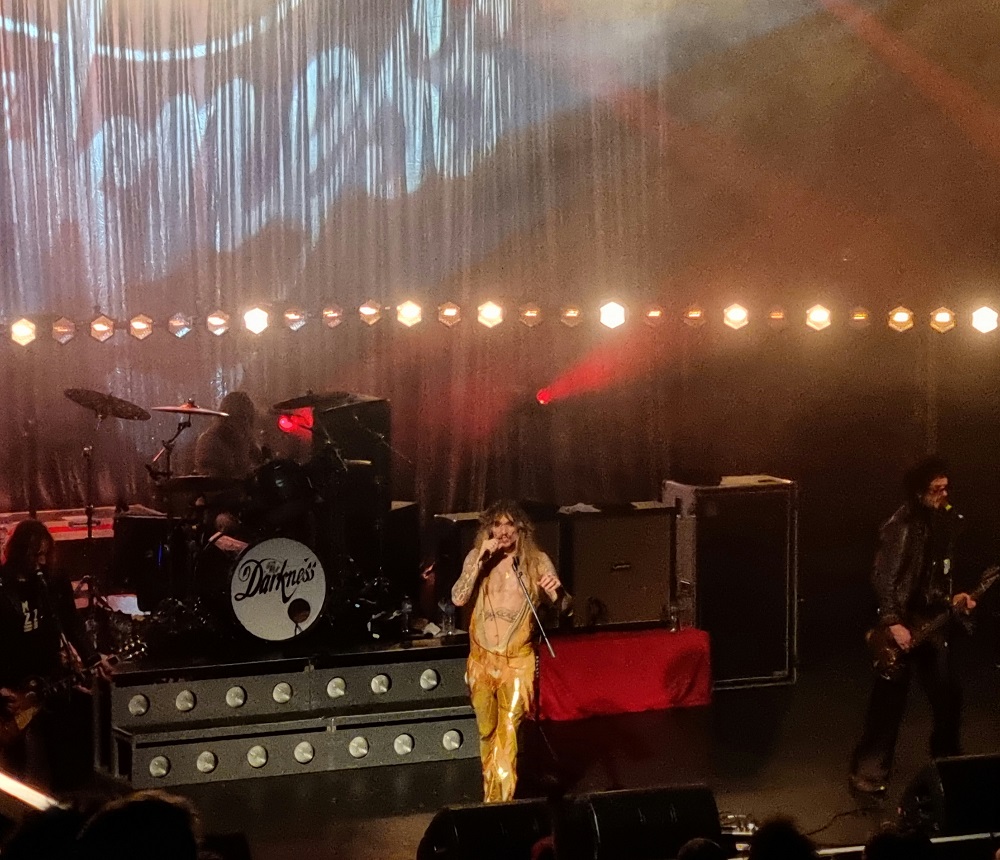 Massive Wagons must be a nightmare if you’re a big rock n roll band. Almost at a moments notice, it seems, Baz Mills and the lads can turn up, plug in, and star. “I smell the blood of an English rock n roll band” screams Mills to usher in “Fee, Fi, Fo, Fum” and for half an hour after that, honestly, there is none better. “In It Together” – perhaps an anthem for the pandemic – and the even better “China Plates” (a personal favourite of MV’s because of its hatred of social media) are superb rock n roll songs. This is a band, though, that knows what its got and has some absolute Premier League songs under its belt. Three copper bottomed modern belters, in “Banging On The Stereo”, “Ratio” and “Back To The Stack”, but their trump card is Mills himself. Dancing away in the former, owning the second and the Status Quo soundalike of the latter. So, we “raise a glass to Rick” in the best way possible, by doing him proud. You can watch as they go through the set and you can see the moment when the crowd goes from stand-offish to full on Wagons fans. This is what Massive Wagons have been doing for years. One audience at a time, and that’s what they do. They are like a force of nature that you can’t resist.

They are marmite, I suppose. You can either believe, like MV, that their debut “Permission To Land” saved rock n roll from a fate worse than Limp Bizkit. Or you think they are OTT stupidity.

And what’s more, I’d wager, that the band know it too. Moreover, absolutely nothing that happens in the next hour and 40 minutes will alter any opinions.

Crikey, there’s a lengthy bagpipe intro before “Welcome Tae Glasgae”. It’s ridiculous, of course it is, but it’s the superb opening song from their superb new album “Motorheart” – there’s a lot of new songs played too, but The Darkness understand they’ve got to sprinkle it with plenty of the classics.

And, almost to decades into their career, there’s enough of them. “One Way Ticket”, “Growing On Me” are out early on. Normally you’d say these were chucked in like they were no big deal, but in truth that’s not the case here. They are here because they are a big deal.

The early part of the show sees songs pass by in a blur, the title track is a highlight in that section, but things seem to change gear with “Givin’ Up” (the other Hawkins brother, Dan’s favourite song, apparently) and get themselves into overdrive when the frontman does a costume change. The catsuit is …..incredible on every level, lets just say, and all of a sudden, dressing like a 70s arena rocker seems to unlock something inside the boy, because after that he is sensational.

“Friday Night” does the singalong thing, “Love Is Only A Feeling” gives power ballads a good name, and the fact they’ve got a song called “Solid Gold” that – with no irony whatsoever – tells everyone that “we’re never gonna stop shitting out solid gold” tells you all you need to know, about the band, and the gig. Not that it’s all scripted, mind and “Grace’s Amazing Machines” is played by request, and they all seem to enjoy it.

There’s a couple left, of course. “Get Your Hands Off My Woman” still hits home and Hawkins does his handstand thing on the drum riser. Then the words: “we are at that point of the evening where we do the big hit….” and you know what? We all still believe in a thing called love, after all this time.

It’s Christmas, so the encore is full of festive fayre. I can’t lie, its not my thing, never has been and I am not going to buy into the fancy dress – Rufus Taylor plays his kit in a Christmas Tree outfit for one thing – and the covers of “Last Christmas” and “Mistletoe And Wine” do what they are meant to do, as does their own Christmas tune “Christmas Time (Don’t Let The Bells End)” it’s not bad, either and it suits them, I guess as there’s a whiff of panto about the whole thing.

The fun, the songs, the show, this is basically a circus and with Hawkins as the ringmaster, The Darkness are delightful – and delighted, no doubt, to be polarising opinion. They wouldn’t want it any other way.