THE DAMNED, THE VAMPIRES 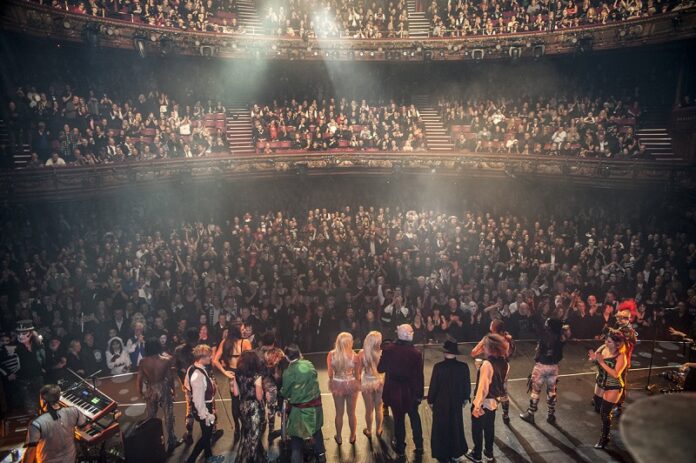 On October 28th, 2019, The Damned took the stage at London’s prestigious Palladium Theater for a very special immersive musical and theatrical experience – performing songs of their 40-year rich catalog.

A true event from showmen supreme, it was a historic night in the history of a storied band and a special evening for fans and band alike. It was also a fond farewell for drummer Pinch, his final gig with his compadres after 20 years.

The long awaited Live-album “A Night Of A Thousand Vampires” teams the first Punk-Band with The Hammer House of Horror and the cast of The Circus of Horrors. With the band and audience in full vampire attire, David Vanian transforms from Dracula into Nosferatu, “Neat Neat Neat” morphs into “Bela Lugosi’s Dead”, and fire-eaters and trapeze artists dazzle to a set that includes classics such as “Wait For the Blackout” and rare performances of appropriate covers like “People Are Strange” and “Eloise.”

A night to remember for those of us amongst the living… and the undead!

Pre-order the album “A Night Of A Thousand Vampires” HERE

Following their formation in 1976, The Damned became the first UK punk band to officially release a single, “New Rose,” and an album “Damned Damned Damned”. With 10 studio albums and several UK chart singles, the band are pioneers who emerged from the London punk scene, earning an ever-expanding fan base fueled by legendary live shows. Their dark lyrics and Dave Vanian’s rich baritone vocals also catapulted The Damned to the forefront of the Goth-Rock Genre. The Damned of today defy any categorization and the ease of which songs from all phases of their career fit together in this groundbreaking spectacle is absolute proo

Previous article
GOAT FLESH
Next article
MADNESS AT THE RACES