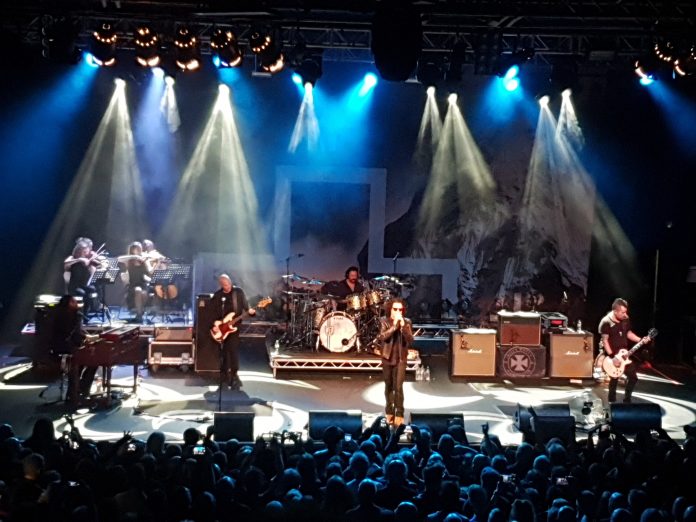 Delila Paz, singer with The Last Internationale, cuts a compelling figure, but oddly, it is when the band strips back for a cover of Sam Cooke’s “A Change Is Gonna Come” that she appears in her element. TLI have been around a while, and there is a craft about songs like “Killing Fields” and “Hit Them With Your Blues”, but there is something beguiling about them, a sort of danger that lurks under the surface. The latter of those tracks comes from a new album that is released next month, and even if “1968” is another which exemplifies the quality of their previous material, too, then something that Paz said before playing the cover sums the band up. “You don’t” she points out, “have to be loud to be heavy” and for a group like TLI, keeping that thought close in these turbulent times might be an important thing to do. 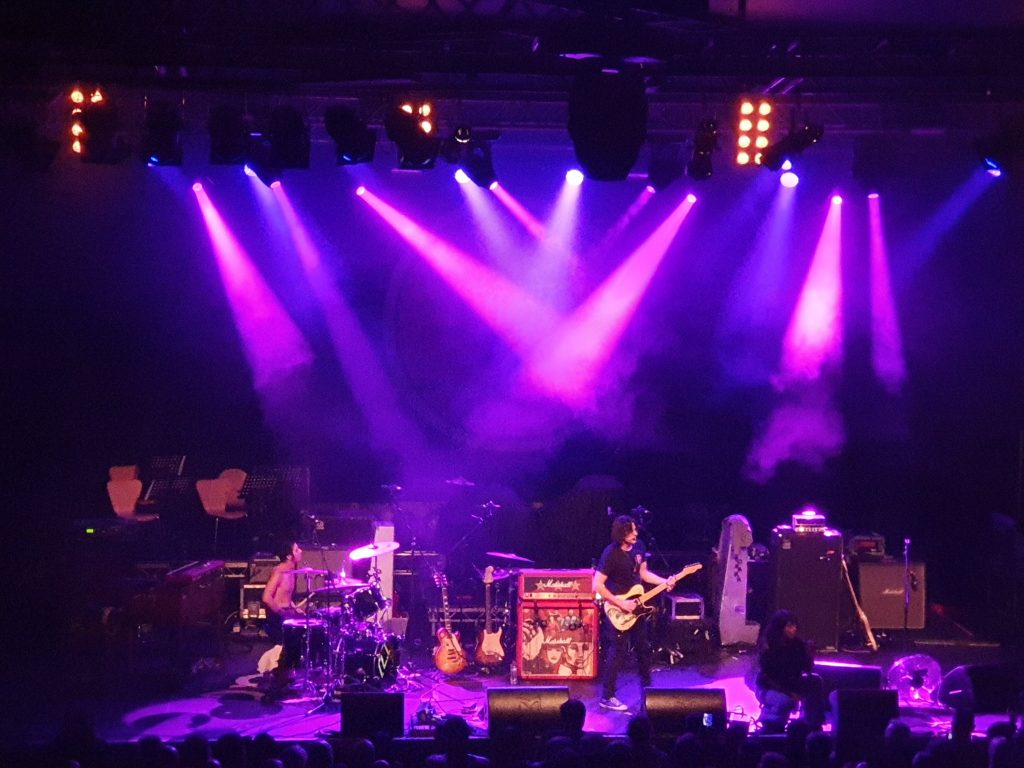 Brighton’s Yonaka have a rather different approach. If the opening act do their social conscience with a bit of guile, then the four piece haven’t come from the South Coast to wait for you to see their point of view. Adopting – if we might borrow a line from The Pistols here – an approach of “we know what we want and we know how to get it” then in singer Theresa Williams they also have the ability to destroy, possibly. Her incendiary presence gives songs like “Don’t Wait Till Tomorrow” and “Rockstar” a real punk edge. “F.W.T.B” has a more urban flavour (and yeah, the “F” stands for what you think it does, the rest of it is “With The Boss”) and “Fired Up” is the perfect end for them, because it is hard to imagine a time when they aren’t. They are back – sold out – on their own next month, and Yonaka seem to have decided that their time is now. It’s probably best not to argue with them. 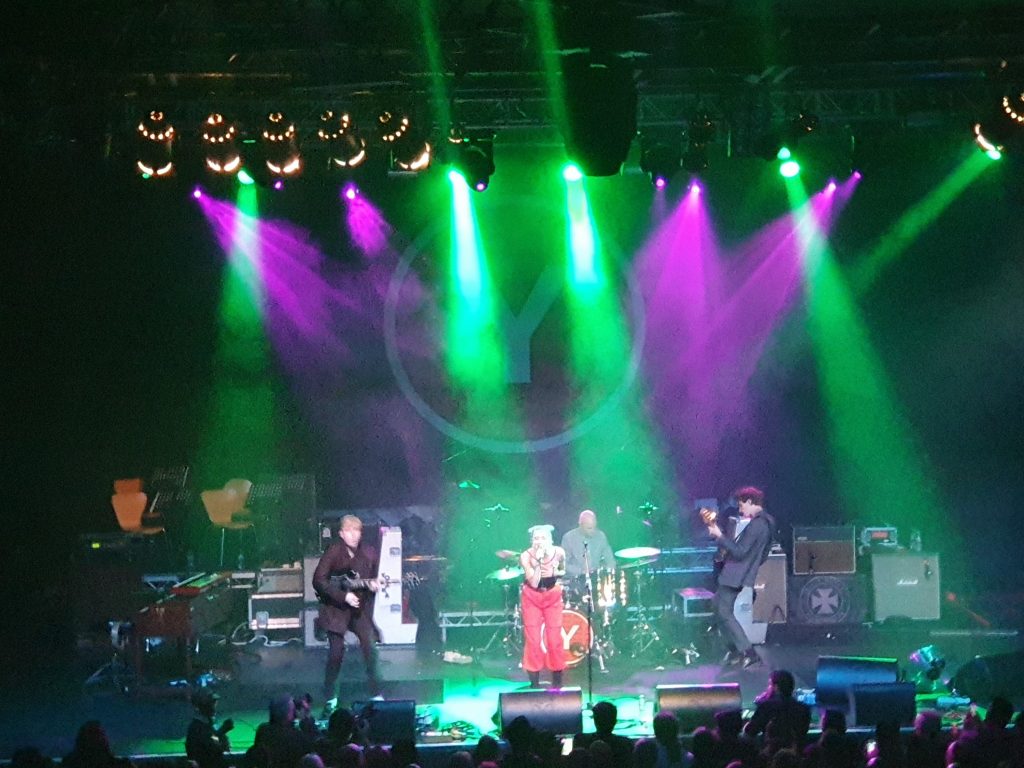 Usually, when bands shout things like “thanks for pushing us” after gigs as they take their bows, it has all the sincerity of a promise from a Tory Prime Minister, but when Ian Astbury does it tonight it rings true.

Their first tour for a while, their first to feature a string quartet (who play on “Edie (Ciao, Baby)” and even a supposed anniversary celebration that wasn’t quite what you suspected it would be either. This is not a band that is resting on laurels.

Thirty years ago, they released the seminal “Sonic Temple” (arguments can be had over whether it is their best record at another point) and that would usually be enough excuse for bands to play it all the way through, and take their leave.

But The Cult have always had a kind of individuality. So yes, they start with “Sun King” and yes there’s a fair old chunk of the album played, but the second song being a brilliant “Wild Flower” from “Electric” gives a clue, perhaps to the fact that they are going to do this their own way still.

But like all the bands that are still going and can still pull in a crowd – and it is heaving in the Academy tonight  – there is a kind of chemistry in the band, still. So when Billy Duffy plays the riffs that are unmistakably his, and when Astbury (all dressed up in dark glasses and leather and lit from behind mostly throughout) sings in that sort of Jim Morrison but English way he has, it doesn’t really matter when you last listened to the band, you sort of pick up where you left off.

And, crikey, these songs have aged well – like the band it has to be said – “Sweet Soul Sister” stomps about a bit, and “American Gothic” provides a kind of de facto centrepiece, while like all the best, it switches gear towards the thrilling denouement, if you will.

“Spiritwalker” is ethereal just like it ever was, but then comes “Fire Woman”. Now, say what you like about anything you like but I’ll stand by this: “Fire Woman” is pretty much everything a hard rock song should be, ever was, and ever needs to be. It still is.

“Love Removal Machine” isn’t far behind, and the encore means that “Horse Nation” is kind of fun, but everybody is waiting for “She Sells Sanctuary”. They get it. Of course and it is superb.

When you are a kid and you start liking music, your eager grandparents like to encourage it. When I was about 13 years old, mine bought me a compilation tape for Christmas. I’ll never forget it. I’ve still got it somewhere. The Chart Show: Rock The Nation it was called. It had loads of good stuff on it, but there were two that I listened to above all others. “Battleship Chains” by Georgia Satellites was one. The other was “L’il Devil” by The Cult.

They don’t play that, here, but I mention that for no other reason than to show how important their music was to me at one point. In truth, I rather lost touch with them after seeing a less than stellar gig a few years back, but this was a world away from that. This was a band on top form, absolutely loving being onstage again and connecting with their crowd. And proving why they belong in the big leagues.