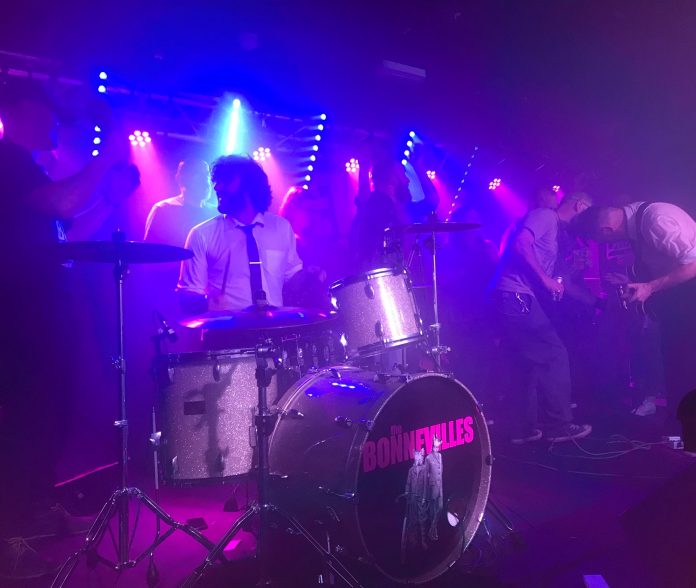 I can’t hear any mention of sweetening products in music without thinking of Def Leppard yelling “do you take sugar, one lump or two?” for seemingly no reason whatsoever. Thankfully, though The Big Sugars haven’t come from Coventry to rock the spandex. Instead, their brand is s sweet mix of classic and glam rock being sung by a bloke with a massive beard who dances with all the grace of Clutch’s Neil Fallon after a hip operation. All of which makes them just fine with me. There is something just a little unhinged and off the cuff about them. Their own songs – one of which is possibly entitled “666” and one of which is definitely called “Pelican Blues” are mixed in with a cover of The Beatles’ “Can’t By Me Love”, before which their singer, who is possibly called Jonathan says “we’ll work it out as we go”. There does seem to be an element of that too, but there’s no doubt that The Big Sugars are much fun. 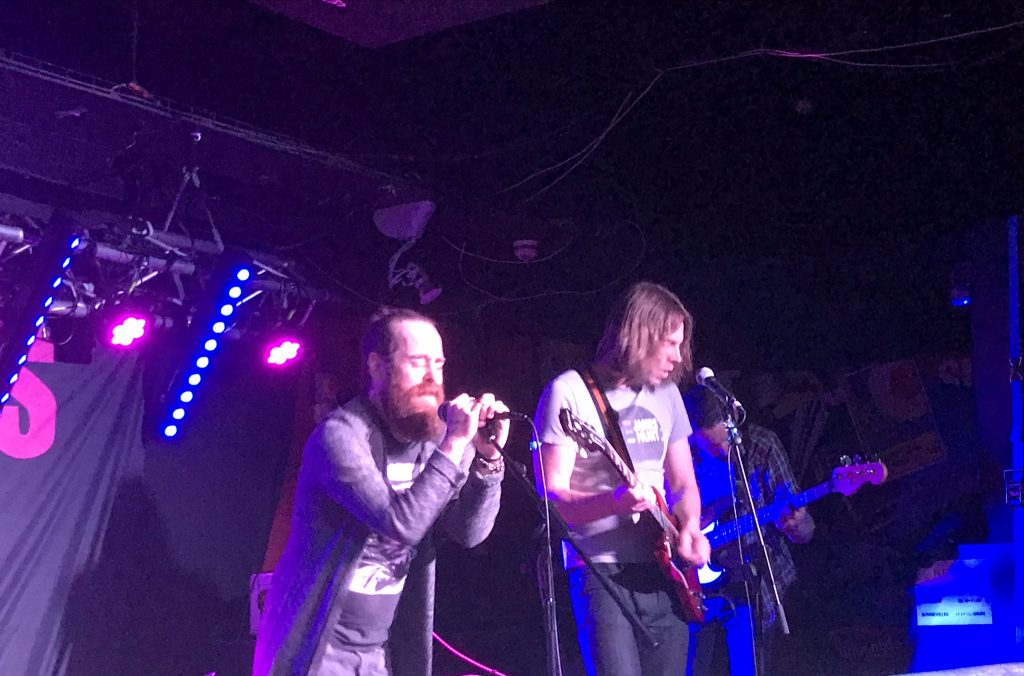 Towards the end of their set, The Bonnevilles’ Andrew McGibbon Jnr, is thanking the support bands. “It’s criminal how under the radar Mudlow are. We’ve been trying to do a tour with them for years. If this has educated you as to their borderline genius, then we’ve done our jobs.” Hands up time – I see no point in lying here – I am one of those who was in for the lesson. And yet, its hard to see why Mudlow weren’t household names by this point. “Mudlow play the soundtrack to the dark worries…when you can’t sleep at night!” Is a line I read about their music and it seems right on the money. Always instinctively drawn to the primal end of blues, whether it be Left Lane Cruiser, tonight’s headliners, or German kings The Picturebooks, there is something to love straight away about a band who’s drummer smashes his kit with maracas, as Paul Beat does here for the first track. By the second, I can see McGibbon Jnr dancing in the corner for all he’s worth, and before we’re done Tobias – who’s vocals are somewhere below Tom Waits on the gravel scale – has claimed “Codename Toad” is about his time working for the American Government “but can’t say much more. Mudlow’s music does the talking instead, his slide, and the outrageously filthy bass of Matt meaning that the “love song” they play sounds like it just wants to rip your knickers off, and the song about being “shot in the stomach” relishes the pain. “Lower Than Mud” was supposed to end things, before McGibbon Jnr himself insists on an encore, which they deserve, because Mudlow are absolutely glorious, and just a little bit messy. 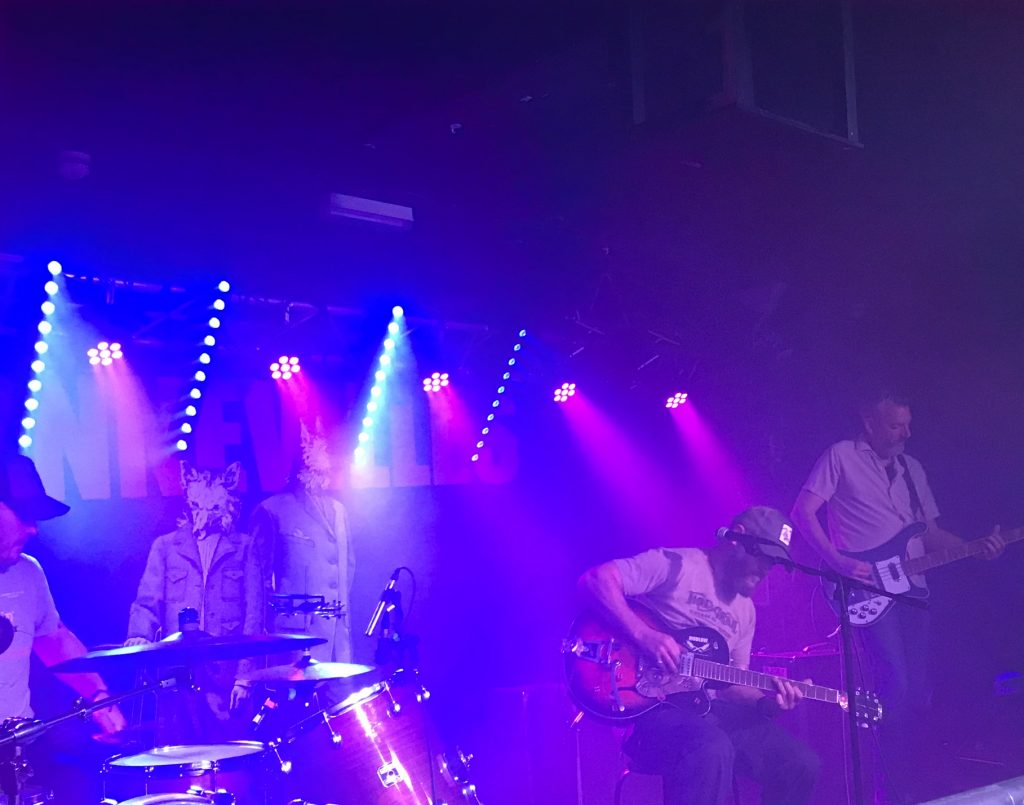 Watching Mudlow was interesting, because it made me think back to the time a few years ago that I got sent a record called “Arrow Pierce My Heart”. It was rare that a record comes to me from a band I wasn’t aware of that was so, so good.

They were playing this very venue not long after too and watching that gig – which from memory was a raucous party that didn’t end until well after midnight – it was clear The Bonnevilles were indeed something very special.

I’ve seen them here each time since, and it is striking how many more people are there on each occasion. No doubt fuelled by the word of mouth that goes: “oh you’ve got to see this band, they are incredible……” 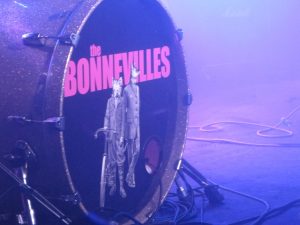 And there is nothing like them. There really isn’t.

Two of them, white shirts and black ties, like undertakers, the energy, the passion and the fun that takes place while they’re onstage has echoes of everyone from RL Burnside and Muddy Waters to whatever punk band you’d care to name, but really, it only belongs to them.

So when they start with “The Good Bastards” here, then the easy pun writes itself: these boys are bastard good.

Songs pass by in a blur. “Dirty Photographs”, a magnificent “Poachers Pocket” and my personal favourite “The Electric Company” – with its immortal first line of “I know I am a sinner, and I’ll probably, definitely sin again” – are full on and thumping, as is the version of Barrett Strong’s “Money”.

This, though, is a more nuanced attack than many bands like this manage. “I’ve Come To Far For Love To Die” is nothing less than lovely, and although most of this is supercharged, “Good Suits And Fighting Boots” – the title track of their debut record – proves they’ve always had the fire and that years on the road hasn’t snuffed it out yet.

This is the “Long Runs The Fox” tour, and its only right that one gets an outing, and it wouldn’t be a The Bonnevilles show, we’ve come to learn that, if “No Law In Lurgan” isn’t here and “10,000” doesn’t have a load of people dancing on the stage with Andrew and Chris on drums in wonderful, defiant celebration.

The Bonnevilles, a band who’s records are brilliant, but who come alive onstage, should be household names. That though, would stop nights like this belonging to just us instead.