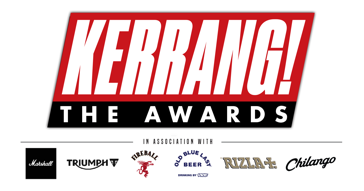 KERRANG!, the world’s greatest rock brand and only weekly music magazine, has today unveiled the nominations shortlist for the grand return of the annual awards ceremony, taking place on Thursday 21 June at Islington Town Hall. Renowned as the legendary night of rock ‘n’ roll fun, with the world’s biggest rock stars in attendance and some huge surprises along the way – the Kerrang! Awards are back with a bang. Leading this year’s nominations are Foo Fighters, Architects and Enter Shikari, garnering three nominations each. Other nominated acts at the prestigious ceremony are Metallica, Marilyn Manson, Biffy Clyro, Marmozets and many more.

Having played Glastonbury and headlined Download in the last 12 months, Scottish alternative rock heroes Biffy Clyro have picked up two nominations for Best British Live Act as well as Best British Band. They are joined in the latter category by the legendary British metal act Iron Maiden. Competition is fierce as agit-rockers Enter Shikari are up following the success of The Spark, their fifth album, which saw the band embark on their biggest ever UK headline tour culminating in a sold-out show at London’s prestigious Alexandra Palace. Powerhouse hard rock duo Royal Blood and Brighton metalcore heroes Architects are also nominated in that category, showcasing the breadth of voting and nominees.

Frontrunners Foo Fighters picked up nominations for Best Album and Best International Act (in association with Chilango), reflecting the success they have enjoyed since the release of their ninth studio album, Concrete And Gold. They’ll have to fend off bonafide metal pioneers Metallica and rock heavyweights Linkin Park as well as Green Day, Aussie stars Parkway Drive in the latter category.

Best Song is an international affair with Antichrist Superstar Marilyn Manson nominated for ‘Kill4Me’, alongside Linkin Park’s Mike Shinoda for the heartfelt ‘Crossing A Line’. Representing the UK are Wrexham pop-punks Neck Deep with ‘In Bloom’ and Marmozets take centre stage for the riotous ‘Major System Error’. Architects secure their third nomination with ‘Doomsday’, the last song written with their late guitarist Tom Searle in 2016.

Kerrang! has relentlessly championed new and established rock talent for close to four decades and the nominees for this year’s Kerrang! Awards reflect the emergence of a new generation of artists in both the UK and across the world.

The key categories of Best British Breakthrough (in association with Rizla) and Best International Breakthrough reflect what has been a hugely exciting 12-month period for emerging talent.

Conjurer, Employed To Serve and Venom Prison are three acts that epitomise the new wave of heavy music emerging throughout the UK, and they are nominated in the Best British Breakthrough category alongside rising Welsh post-emo outfit Dream State and Blackpool punks Boston Manor.

“The two categories that recognise emerging artists are packed full of remarkable talent. They reflect a new wave of rock music that is exciting, real and vital. It’s not a ‘scene’ per se, because these acts are all very different from each other and set their own agendas, but they are all a reaction to the disposable nature of mainstream music right now.

As Kerrang! enters its 38th year at the heart of the rock scene, the 2018 Awards shortlist is indicative of both rock’s illustrious heritage and thrilling future.”

The impact of Pittsburgh outfit Code Orange is reflected by the fact that they are also nominated in the category for Best International Live Act (in association with Old Blue Last) sitting alongside fellow post-hardcore act Converge and heavyweights Metallica, Guns N’ Roses and Foo Fighters.

As well as the voted for categories, the awards ceremony will also see Kerrang! bestow a number of merit awards recognising career-long achievements. This will include the latest inductee into the Kerrang! Hall Of Fame (sponsored by Marshall) and the Kerrang! Legend Award.

4. BEST ALBUM
1 Enter Shikari – The Spark
2 Foo Fighters – Concrete And Gold
3 A Perfect Circle – Eat The Elephant
4 Marmozets – Knowing What You Know Now
5 Rolo Tomassi – Time Will Die And Love Will Bury It