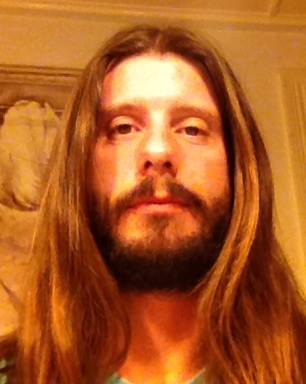 In the first of  a new feature, Donnie sits down with a rock star for 10 questions.

I’m a regular Joe, I guess. I’ve been a teacher for the past ten years teaching ninth graders. I like sailing, kayaking and wildlife camping with my wife and son. Not religious, not atheist. Mainly self-taught guitarist. Making music whenever I can.

I’ve been wanting to make music for nearly as long as I can remember. I’ve tried to make a few bands in the past but it never worked out. At some point I decided that I needed to do something about it and start making that music, even if it meant doing it alone. This is how Revald came to be in 2009.

The first track I made was Summit and I wanted to release it as soon as it was made. At that point, I felt that I couldn’t release anything if it wasn’t a complete album or a single from one that would come not much later. The problem was that I only had that one track and no idea when I would have the next.

I therefore decided to release an album ‘under construction’ like In Perpetuum is now, but it would end up being a finite album called Summit like the first track. Still, I felt something wasn’t quite right with that idea, and I think by the time Decompression had been released I finally figured out what would be right.

I decided that since I saw no reason to ever stop making music it would make sense to make an album that never stops either. From there it didn’t take long to decide what to call that album. Hence, In Perpetuum. I also found it to make sense to make individual chapters as the music would develop over time.

3.      Who else was involved in the playing and production?

No one. It is a solo act all the way. From time to time, I have considered collaborating or making a band in the traditional sense, but I have always found that I couldn’t make the sort of commitment that would take. Not that say that I’m not committed to what I’m doing now, but it’s on my own time schedule. No one else to get frustrated with me for showing up late or cancelling sessions due to other commitments. Another big benefit of being solo is that there is no one else to meet half way when it comes to deciding on the direction of the music and the composition of the individual tracks. It’s all completely me. I think it is important for everyone to have something that is just theirs whether it be creating art or collecting stamps or whatever. Revald is such a thing for me.

4.      How difficult has it been to record the music and what challenges have you faced?

I make all my music in my small home studio. The guitars and bass on the wall and a keyboard in front of the computer screen are the only things that make that room look slightly like a studio.

Finding the right software, especially the right audio workstation took a lot of work, especially in the beginning. An important reason for this is that I don’t want my family to make any financial sacrifices for my music. I’ve found a setup now that works quite well, I think.

I seldom have the time to play and record for more than a couple of hours every now and then so the music is created as small 10 to 30 second segments slowly being built onto each other over long periods of time.

Once the music is released there is the major challenge of standing out amongst everyone else and getting heard. If you don’t play live you have to rely on the internet. This is a huge place with lots of opportunities, but it is far easier to get lost than to be found, especially if you are on your own. Because of that I decided to make the label Solitary Force Records which focuses on solo metal acts such as myself. Maybe I have overlooked something, but it seemed to me that this particular niche hadn’t been filled. It’s a DIY kind of label and it still can’t offer much. But hopefully, in the future, this will change. So far, I and a Greek artist are on the roster.

5.      How important is your environment to your music or do you use your music as escapism from normality?

The answer to that will have to be somewhere in the middle. My music is a way for me to express and share how I experience and perceive things, should anyone be interested. At the same time, it is a way of getting the world at arm’s length every now and then. An opportunity to shut down for a while so I can gather my thoughts and maybe return with a fresh perspective.

Right now it looks like it will be business as usual. Revald started in 2009 and since then I have released seven tracks. A little more than one per year. As I mentioned, I make music whenever I can. This is what it has amounted to, so far. The music has evolved or developed during that time and I plan on keeping it doing so. I’m also working on one day making some music with vocals. When and if that will happen, I can’t say.

7.      What inspires you, musically or otherwise?

I’m not sure what I would say inspires me directly, but I have a feeling that over time the stimuli from things I experience or read or watch or hear accumulate somehow, resulting in an urge to create music. However, I do find that, so far, the general theme of the thoughts going in to composing and finding a name for my tracks has been something to do with trying to capture some sort of essence or core of things or events. The titles Decompression and Fiat Lux, for instance, refer to my trying to envision The Big Bang or Creation itself. Lately I’ve found myself thinking in more down-to-earth sort of things, though. The title The Outpost is an expression of this development.

Of bands or artists I like to listen to I can mention, in no particular order, Iron Maiden, Symphony X, Manowar, Marty Friedman, Yngwie Malmsteen, Paul Gilbert, Jason Becker etc. etc. etc.

In addition to that I like reading articles about science stuff.

I’ve played around with the thought of playing live from time to time. An obvious challenge is the fact that I’m a solo act. I’d have to hire other musicians for live playing or play to backing tracks. Both can be done, of course. I think I’d prefer the backing tracks. Playing live with a band is great. Not much beats that. I did it a few times in high school a long time ago and a few times later in life. But, since Revald has been a one man operation since the beginning I like the idea of keeping it that way, stay true to that. That doesn’t mean I wouldn’t make or join another band if the right opportunity presented itself. Revald wouldn’t stop though. As long as I’m around, Revald is.

9.      What is the current live music scene like in Denmark?

I have to confess that I haven’t paid much attention to the Danish live music scene for quite some time now. Between family, work, the day to day things of life and making music, there isn’t much time for anything else. Soon, soon……

10.  Are there any other Danish Artists/Bands that you would recommend we check out?