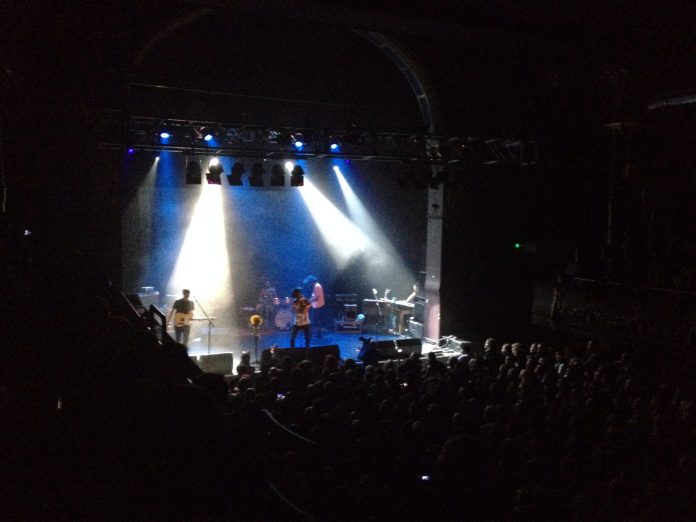 British Rock n Roll’s next crossover kings? Don’t bet against it. Trouble is not their only friend anymore

Irish four piece Raglans are a new name to us at MVM. Their sound is familiar though, as they sound not unlike their countrymen Riptide Movement. We are in catchy, almost indie, territory here, but there is just enough folky intent to the quiet ones and just enough rock bluster about the loud ones to stop them being tedious. “(Lady) Roll Back The Years” is jaunty and “Man From Dublin” rattles along. Raglans also do two things we always enjoy. First they use a mandolin liberally. And even better they end with lots of extra percussion. The quartet are essentially the uplifting sound of a band enjoying themselves.

The Temperance Movement’s rise has been a real rock n roll success story. To backtrack 18 months, they played just up the road at a venue that holds 100 people, tonight they are in a room that could find room for well over 1000 and one which we’ve seen acts such as Down and Marillion headline. And that’s not bad company to keep.

They’ve done it the old fashioned way. That is to say by being just a bit too good to ignore. The “Pride” EP, was an absolute stone cold statement of intent, the self-titled debut which followed (and began with those four original tracks) emerged last year and sold by the bucketload.

Yes, they had an interesting back story, all appearing in some reasonably big bands in their musical past, but this was a band that went on the road and played. And played. And played. Building up a following – getting in the charts while they did it. Now they are off to the US, where they will be special guests to Blackberry Smoke next year. Hard work sometimes does pay off, y’see.

This being their latest UK tour. And fair play to them, they kick off with a new track. Just because they can. It’s a belter too. All early 1970s bombast like The Faces playing Led Zep, all set around a dirty great hook. You might say, then, that all is as it should be in the world of The Temperance Movement.

Then they follow this up with “Midnight Black” somewhat of a big deal as, on an album that’s choc full of ace moments “….Black” is the best. And tonight, it’s delivered by a band that is on top of it’s game and knows it too.

Another new song follows, an absolute stormer that takes on Rival Sons in a bar fight, thrashes them and disappears gleefully about it’s business.

For the first two tracks singer Phil Campbell has been wearing preposterous dark glasses and a sillier hat, with those removed he sets about joining the Ministry Of Silly Walks and thrashing a tambourine. He’s a phenomenal frontman with a superb voice, as he proves a little later in the set during “Smoldering,”

In amongst a lot of new stuff, “Get Yourself Free” is a funky highlight here, along with the Creedence Clearwater Revival urmmm revival of “Centrefold,” they don’t forget the debut. So “Ain’t No Tellin'” is still brilliant (Campbell dances around with a giant Sunflower during it, we don’t ask why…) while the countrified “Chinese Lanterns” is lilting and gorgeous – although not performed amps off like it used to be.

They know, hell we all know, this is a band that’s ready. They turn “Know For Sure” into a huge singalong, and give it a slightly different arrangement than the record too, as if over the course of the last couple of years they decided it should have sounded like this all along, the way groups used to do. They extremely neatly segue this into “Take It Back” with it’s all it’s stomping Stonesy vibe.

If the band have an anthem in the the old-fashioned sense then “Only Friend,” judging by audience reaction, is the one to really connect (the singer dons his hat and glasses for this one by the way.) The lights go up after this and the cross section of appeal for this band is evident. This is not a young crowd nor is it a rock crowd, rather Temperance Movement have somehow found the recipe for mass appeal.

The encore takes in more fresh material, this one with it’s enormous chorus and huge intentions, seems set to form the centerpiece of the new record, before “Serenity,” which essentially did that job last year, does so again.

Although only a couple of miles in distance, things have come a long way from the back room of the Hare and Hounds (not even the largest room there, if you don’t mind) to here, but TTM deserve every single bit of praise. Far be it from MVM to predict what the modern mainstream is going to lap up – given that your humble writer is watching the gig in a Thin Lizzy shirt it’s probably not a thing we should do – we’ll leave that to people far better qualified than us – but let’s just say this: In five years time The Temperance Movement won’t be our band anymore, they’ll be everybody’s. Deal with it. It’s going to happen.