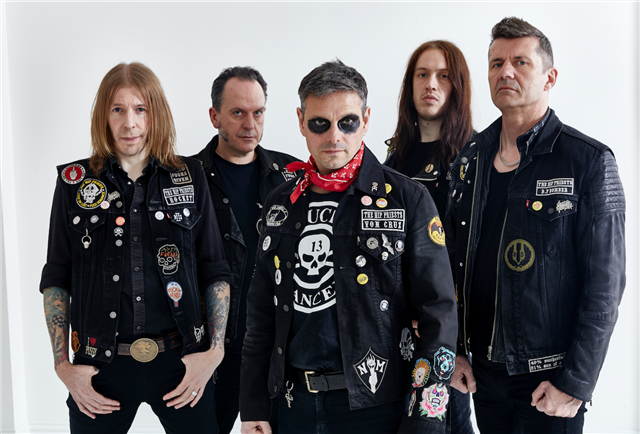 THE HIP PRIESTS FROM NOTTINGHAM, ENGLAND PREACH MISANTHROPY, HATE, SEX AND CONTEMPT ON THEIR LATEST ALBUM TITLED, STAND FOR NOTHING,
ALBUM STREETS IN THE U.S. ON MAY 10, 2019 ON DIGITAL WARFARE RECORDS

April 15, 2019 (Tacoma, Washington) – Digital Warfare Records announces new album by Nottingham, England’s garage-punk band The Hip Priests. The album titled, Stand For Nothing, will be available as CD and LP on Friday, May 10th, 2019.

Fiercely independent and tirelessly driven, the ‘Priests have preached their high energy sermon of misanthropy, hate, sex and contempt across tours of the UK, Europe and USA, and have made countless rapturously received festival appearances. Gaining a richly deserved reputation as a white-hot live band they play to ever increasing audiences both at home and abroad. The band has recently toured with Zeke, Dwarves and delivered a stand out set at Eindhoven’s Helldorado Festival.

The Hip Priests have spent the last twelve years releasing a slew of records, touring all around the world, all driven by their dogged determination and DIY spirit. This has included two trips to the US as well as playing virtually every country throughout Europe with artists like The Hellacopters, Hewhocannotbenamed, New Bomb Turks, Nashville Pussy, Peter Pan Speedrock, Electric Frankenstein, Nick Oliveri, The Black Halos, The Nomads and more.

Vive Le Rock Magazine rates the current album 9/10 stating “Their Turbo-Charged Punk Rock n’ Roll is a riot….a sonically charged clenched fist taking a well-aimed shot at the political classes. Brilliant album, you got that, right?” And RPM.com proclaims “Stand For Nothing has never felt more like a perfectly timed record…The Hip Priests have written one of, if not THE most important garage punk albums of 2019. Essential.” Lastly, 50thirdand3rd declares the band is “harnessing unmatched anger, confidence and destruction. The Hip Priests defy the definition of the genre and become the embodiment of what punk stands for.”