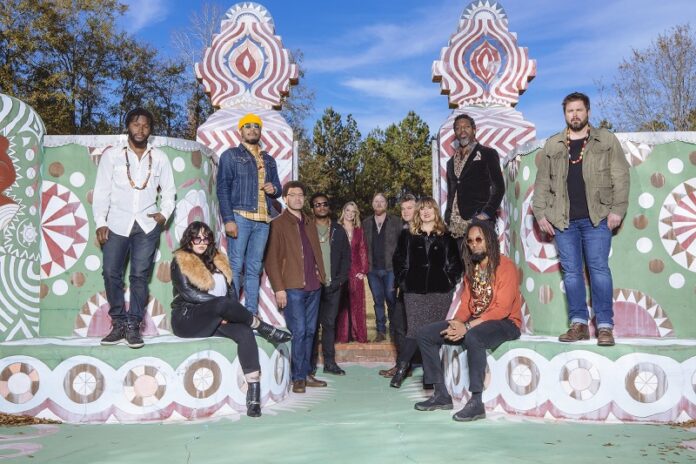 Today, Tedeschi Trucks Band — the GRAMMY-winning 12-piece rock group headed by Derek Trucks and Susan Tedeschi — share the poignant and uplifting “Soul Sweet Song,” the first look at I Am The Moon: Episode IV. Farewell, the final chapter in their epic, four-part album series I Am The Moon.

Commenting on the track, Trucks explains, “That was Gabe,” he says of keyboardist Gabe Dixon, who co-wrote this song with the guitarist and TTB vocalist Mike Mattison. “He had the idea of writing about Kofi.” (Original TTB keyboardist Kofi Burbridge died in February 2019.) Trucks continues, “Gabe’s lyrics: I feel your rhythm moving me/’Cause your soul’s sweet song’s still singing – that hit me between the eyes.”

“Soul Sweet Song” rides a sun-dappled groove and Susan Tedeschi’s sparkling lead vocal with a message of connection and hope, listen HERE. The video for the track is taken from the album’s full-length companion film which debuts on the band’s YouTube channel Tuesday, August 23rd. Watch the “Soul Sweet Song” video HERE. I Am The Moon Part IV: Farewell is out digitally and on CD Friday, August 26th, 2022- Pre-order HERE.

Additionally, on Monday, August 22nd, Tedeschi Trucks Band will make a rare, live television appearance on Jimmy Kimmel LIVE! performing music from I Am The Moon on TV for the first time. This performance comes in the middle of a West Coast run that includes dates at the Greek Theaters in Los Angeles and Berkeley, before the band gears up for their near-mythic annual run of dates at the Beacon Theatre in New York City at the end of September. See full tour dates below.

Few groups are capable of the uniquely nuanced amalgamation of American music — jazz, blues, rock, soul, funk, roots, and psych that TTB integrate on a nightly basis and, on I Am The Moon, they take those studied forms and construct their own language out of it.

Excitement and anticipation around this project continues to build as each film and LP is released and the band unveil fresh performances of this new music on the road. Recognizing     I Am the Moon’s unusual scope and depth, fans have validated the band’s ambitious strategy absorbing the new material with rapturous approval, giving each release a ‘can’t miss’ atmosphere.

In this thrilling new and creative chapter for TTB, the four albums that comprise I Am The Moon — I. Crescent, II. Ascension, III. The Fall, and IV. Farewell — feature staggered release dates over four successive months.  In addition, each installment of I Am The Moon is accompanied by its own album-length companion film that will debut three days prior to each audio release. The immersive films offer fans the chance to experience the music as the band intended, in an unbroken, communal setting. Full film and audio release dates below.

TTB’s Mike Mattison recently sat down with PRX The World to discuss Persian poet Nizami Ganjavi’s “Layla & Majnun,” the influential epic romance poem that was the thematic throughline of I Am The Moon. Listen to the interview HERE.

Last month, Derek Trucks spoke with Rick Beato for a far-reaching interview that delves into Derek’s one-of-kind guitar/audio technique, his deep-rooted jazz influences, and so much more. Watch HERE.

All vinyl configurations, including individual LPs and the 4-LP I Am The Moon Deluxe Box will be available on September 9th, 2022. (The TTB store has sold-out, please order EXCLUSIVELY through the Fantasy Records store.)