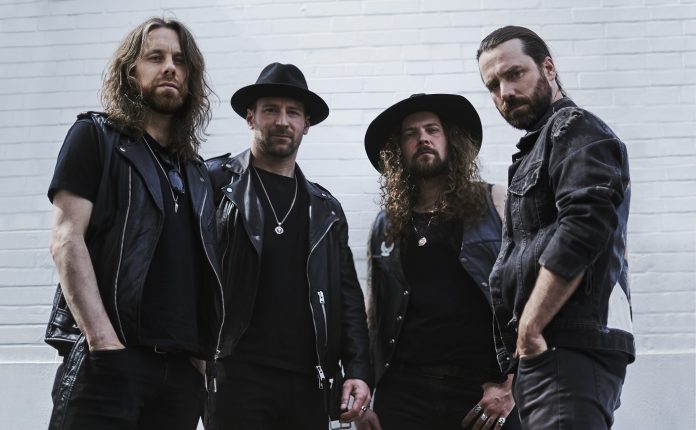 Next month, Monster Truck will be returning to the UK as part of their April-May European Headlinerun, and to celebrate this Old Sarum Tattoo’s will be setting up pop-up booths to bookend the tour at the Bristol and London shows.
Monster Truck will be joined across all dates by their Edmonton friends, Royal Tusk.Sometimes there is the dilemma of where to meet up before a gig. Well, for the UK Truckers coming along to the shows, Old Sarum have the answer. They will be packing up the studio and bringing it to the fans for an exclusive Monster Truck tattoo and merch shop, giving fans a unique opportunity to unite, buy merch, get inked up, hang out and then rock out.

There will be a range of special Monster Truck designs to choose from as well as classic rock and roll designs.  They will be based at The Hatchet Inn, Bristol on Thursday 18th April and at the original Hard Rock Cafe, London on Saturday 27th April. The stands will be open from 12pm both days. For the designs contact them at Facebook and Instagram.

The Salisbury based studio has rock & roll run through their veins, which has seen them have pop-up booths at Download Festival as well as shows for Black Stone Cherry, Halestorm, King 810 and Steel Panther.

The headline run from the Canadian hard rockers, follows their triumphant Arena tour with Black Stone Cherry late last year. They will be playing songs form their new album ‘True Rockers’, which was released on Mascot Records in September, as well as some of their classics. It has been 2 years since their last headline run outside the US and Canada and talking about returning for the tour singer/bassist Jon Harvey says, “I f***ing love Europe and the UK! I’m so excited to come back and play a proper headline set to our supporters! We have an incredible night of rock n roll planned. It will be a night no one will ever forget.”

‘True Rockers’ was written during the time on the road whilst they were touring with the likes of Deep Purple, Billy Talent, Nickelback, Jane’s Addiction and more through 2016 and 2017 . The UK got the first taste of the new songs during their explosive set on the mainstage at Download Festival this summer on the Guns’ n Roses headline day.