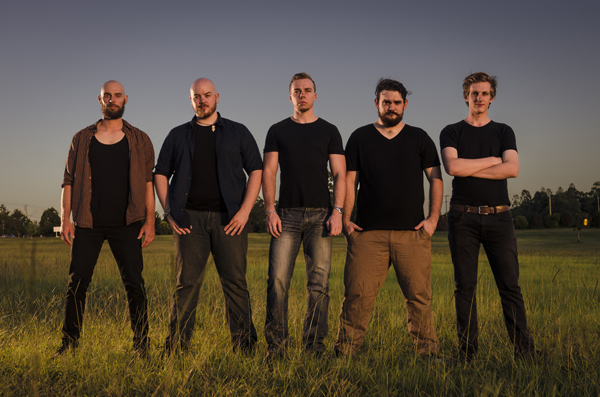 Brisbane prog-metallers THE STRANGER are today carving their mark in the Australian heavy music landscape with the release of their new single DIVINE INTERVENTION. Divine Intervention is the first salvo of an assault-via-album due early 2017 and sets the tone sonically and thematically for the album.

The Stranger formed in 2013 as the brain child of Kalen Austin and Daniel O’Brien, with the goal of exploring musical expression by leaving no musical stone unturned. The Stranger has since carved a presence in the Brisbane music scene and has developed their sound into an eclectic mix of progressive metal, djent, folk and acoustic.

Drummer for the outfit, Daniel O’Brien said of the new track,”Divine Intervention is the story of an aggrieved deity whose apathetic pantheon’s tenacious destruction of evil drives him to question his own morality and the very nature of good and evil itself.”

To ring in the single and to cap off 2016, The Stranger are playing Brisbane’s THE TRIFFID on Thursday December 22 as part of TRIFFID PROG.

Since its inception, The Stranger has been captivating audiences with their energetic live performances which display the interplay of instrumental virtuosity and lyrical story telling – for which the band has become known. The Stranger has been fortunate enough to share the stage with Australian progressive metal powerhouses Caligula’s Horse and German power metal legends Helloween.

The single, Divine Intervention, is the story of a champion deity, a slayer, a warrior and bringer of peace whose efforts spearheaded the expansion of life and order in the chaotic universe at the beginning of time. World after world fell under his mighty crusade, and more and more restless he grew as he gained wisdom and prescience. Must all other life be simply destroyed or imprisoned to preserve the order of nature? And who was he, or his pantheon, to dictate the order of nature? His worries grew, an uncertainty brimming within him. His fellow gods dismissed his doubts, the worried delusions of a bored soldier they thought, and bade he resume his duties. Before long his doubt had grown beyond control, and cracks began to show in his divinity, allowing the darkness of the aberrant worlds he conquered to seep into his soul. The darkness in his being grew and grew until it consumed the champion with insanity. Vowing mad revenge on his former pantheon, and freeing the denizens he had imprisoned in his first crusade, he travels from world to world, amassing an army so that one day his great crusade might plunge the universe back into chaos.

The Stranger’s DIVINE INTERVENTION single will be available in iTunes and Spotify and all other online outlets on November 25th. For more information, go to http://www.facebook.com/thestrangerband