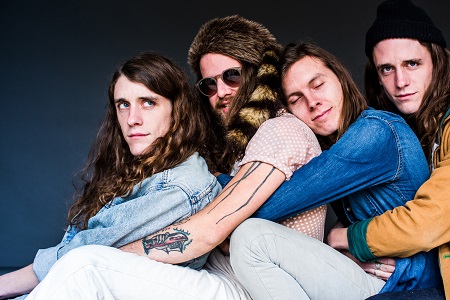 ‘Easy‘, the highly anticipated new album from rising Nashville-via-Mississippi band The Weeks, is set for release April 7th on Lightning Rod Records. The new video for “Talk Like That,” the album’s first track, debuts today featuring live footage shot entirely by the band’s own drummer, Cain Barnes.  Pre-order Easy, with special packages—including one of a kind artwork by band members Cain and Cyle Barnes, here.

The Weeks recorded ‘Easy’ over the course of two weeks at Memphis, TN’s Ardent Studios with producer Paul Ebersold. The band left Nashville to record in order to disassociate themselves from their everyday routines in the city, and to find a halfway point between their two homes old and new, Mississippi and Nashville. “Memphis has always been the capitol of North Mississippi to us”, says guitarist Sam Williams. “We went there to be at Ardent. We knew Paul had learned everything from John Frye and John Hammond so we figured that was the spot. It’s important to keep those historic studios alive and not let them become museums.”

Of the record, frontman Cyle Barnes says, “We called it Easy because every time I make music with these guys, it’s easy. It feels good. But the other side of it is there’s nothing easy about being in a band. There’s nothing easy about staying together for ten years and still wanting to make music. We have the hardest and easiest job on the planet. But it works for us.” Thematically, Easy explores new ground for the band. Bassist Damien Bone explains, “We just wanted to make a rock record. We weren’t as concerned making it a southern rock record. The southern thing is always going to part of what we do.”

To celebrate the release, the band will tour North America extensively this spring. Further announcements are forthcoming. The Weeks is twin brothers Cyle (vocals) and Cain (drums), Sam Williams (guitar/vocals) and Damien Bone (bass). Formed when its members were in high school in Jackson, Mississippi, the band self-released its debut EP Dog Days in 2006. More than ten years and a handful of critically acclaimed albums later, the band has relocated to Nashville and toured extensively worldwide with Kings of Leon, The Meat Puppets, North Mississippi Allstars, Local H and many more.