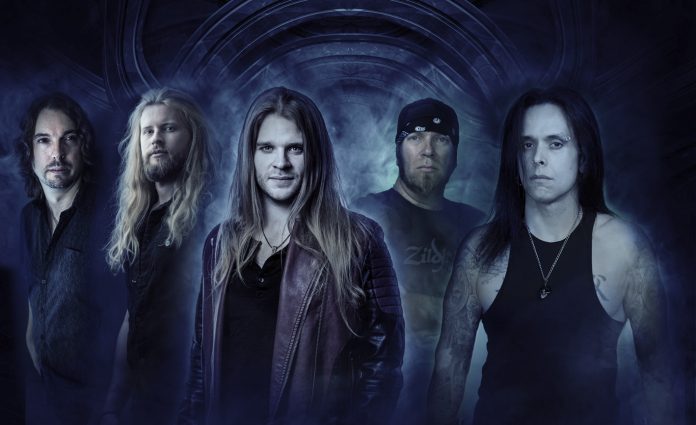 NORTHTALE – behind this illustrious name lies nothing less than a Swedish-American power metal supergroup! Formed by guitarist Bill Hudson (TRANS-SIBERIAN ORCHESTRA, I AM MORBID, ex-U.D.O./DIRKSCHNEIDER), vocalist Christian Eriksson(ex-TWILIGHT FORCE), and drummer Patrick Johansson (ex-YNGWIE MALMSTEEN, ex-W.A.S.P. etc.) in late 2017, the line-up was quickly completed by Mikael Planefeldt(bass) as well as keyboardist Jimmy Pitts. Now the quintet has finalised their highly-anticipated debut album entitled »Welcome To Paradise«, which will see the light of day this summer. Delivering a load of (largely) fast-paced anthems, imbued with Eriksson‘s soaring vocals, the band will not only please fans of titans such as HELLOWEEN, SONATA ARCTICA, GAMMA RAY, STRATOVARIUS among others, but draw new fans to the genre too. That’s why Nuclear Blast is happy to announce the signing of this promising outfit today. The group is set to conquer not only your audio systems, but also the world’s stages, with their very first gig to take place at their label mates SABATON‘s very own open air festival (Aug 14-17) and heading forward to two concerts in Tokyo, Japan for the Evoken Festival (Aug 31 & Sep 1). Stay tuned for further info…!

The track is also available on Spotify, iTunes and other digital music platforms. Make sure to follow the band to not miss their upcoming material: https://open.spotify.com/artist/0cxYOcvgOWW1MJEoWeuCvg?si=QlwNWsuYTASg4-VYPXVcyg

“We are beyond thrilled to announce that we have signed a deal with Nuclear Blast Records! Growing up listening to records they have put out has greatly influenced music and the way we look at it. It is beyond humbling to be able to have our first album out on such an influential record label, one that has from the very beginning embraced us as family. Being a part of the Nuclear Blast family will allow us to put our music in front of every single heavy metal fan willing to listen, as well as give us the opportunity to play for them live! We cannot wait to play as many shows as we can and bring our music out on tour with us! See you on the road!”
Bill Hudson & Christian Eriksson
NORTHTALE

“We’ve been following NORTHTALE since their formation as we’ve always had huge power metal fans in our company. Of course, we expected nothing but irresistible tracks from the group, just take a look at the amazing pedigree of their line-up… How can you expect anything else? And we were not only proven right, the result easily exceeded our hopes! Since the arrival of »Welcome To Paradise«, we’ve been spinning them endlessly. We’re happy to introduce NORTHTALE to the metal world and to be able to unleash their refreshing debut album upon the world very soon!”
Markus Wosgien
Nuclear Blast A&R / Head Of Promotion