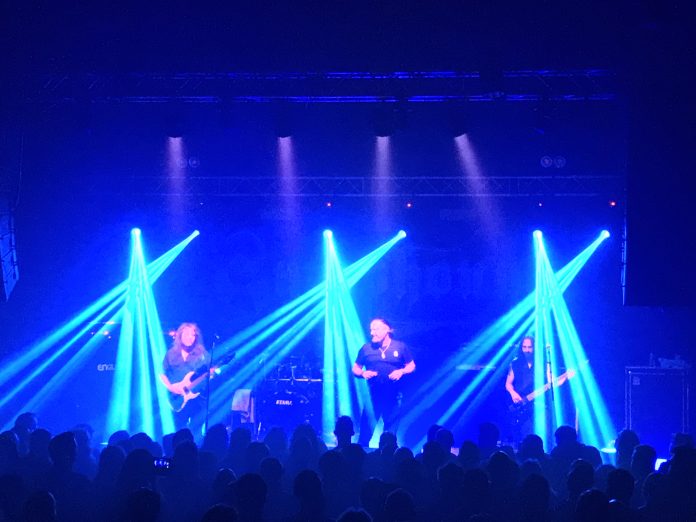 About two miles from The Empire tonight, The Spice Girls are filling a football stadium for the second night in a row. Whether that proves anything much beyond the fact that nostalgia tours are a sure-fire way to make money, I’m not sure, but it does allow me to – yet again – point out a lack of justice where Savage Messiah are concerned. Put it like this what I really, really, really want (come on I’m allowed to torture the metaphor once?) is for them to stop being wannabes (ok twice) and for the world to wake up to how good they are. Their just released record, “Demons” – I stand by the claim I made on this site that it was the best metal record of the year so far – forms nearly all of the set and it proves the class of the collection. “Virtue Signal” kicks the thing off, while “Heretic In The Modern World” rockets along. Savage Messiah have got plenty of light and shade, with “The Lights Are Going Out” has a real balladic quality, but “Under No Illusions” ramps up the heaviness. SM deserve credit for being here at all, given that three days ago singer Dave Silver couldn’t speak and David Hruska, their lead guitarist had to fill in. All you need to know about them really is this: they can own “Parachute” by Chris Stapleton one minute, and thrill with something incredibly heavy, like “The Fateful Dark” straight after and nothing sounds out of place. That is the only “old” song they play tonight too, with the inference absolutely clear, this is a band who is looking forward – and the symbolism of the name of the last song too, “Down And Out”? Not a bit of it. 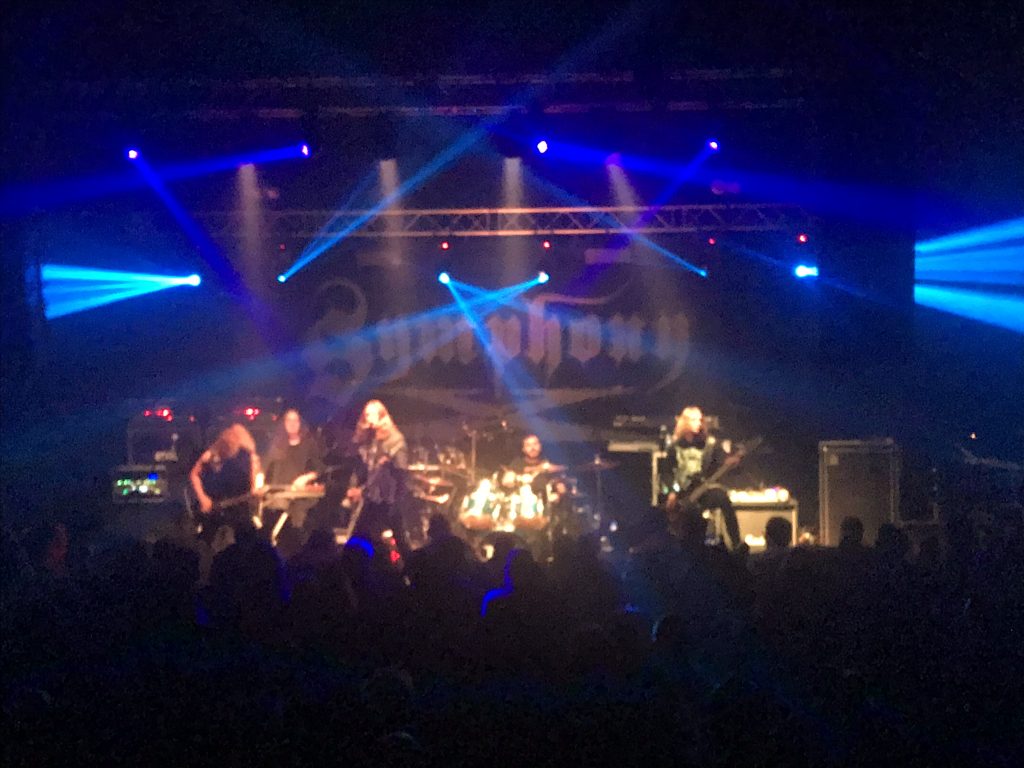 It’s probably the musical equivalent of laughing at your own jokes, but nonetheless, at the end of “The Odyssey”- the last song here –  Symphony X singer Russell Allen grabs guitarist Michael Romeo towards him and says simply: “What a song! Give it up for this man, Coventry!”

You simply can’t argue, either. This labyrinthine journey of one song has held pretty much everyone spellbound, and a more majestic 25 minutes you will not find anywhere, really in metal.

The closer making a return to the set might have been a – welcome – surprise, but there’s something that shocks me every time I see SX. The palpable sense of fun on stage when they play. The New Jersey boys have an attitude more akin to the hard rockers from that state than the more po-faced proggers they get lumped with, and watching Allen shadow box his way through “Nevermore” here, or asking someone to throw an imaginary baseball “so that I can hit this out the park with the next song”, you are left realising that everyone here is enjoying this immensely.

The reason for this is possibly rooted in the moving speech Allen gives before “Without You”. “Last time I went away,” he says, “I nearly didn’t come back”, he says. “Three of my friends died – one right in front of me, all you got is today….”

The alluding to the terrible bus crash when on tour with Adrenaline Mob, one of his other bands, explains much, perhaps, but what is also undeniable is that Symphony X have for 25 years now been right at the top of their game.

Watch them play “Iconoclast” or a wonderful “The Serpent’s Kiss” here and the dazzling musicianship is married to genuine songs by this band maybe better than any of their peers.

“Run With The Devil”, from their most recent record “Underworld” (and blimey, four years has flown by!) is a rock n roll song to all intents and purposes, and effectively a golden oldie these days, “Sea Of Lies” – which is the one that Allen wanted to “hit out of the park” scores a big home run.

Jason Rullo’s pummelling drums are right to the fore all night, but never clearer than “Set the World on Fire (The Lie of Lies)”, which is ostensibly the set finisher, but the encore proves they were merely getting started.

At little like the openers, these boys might be rather more under the radar than they deserve, Symphony X, keep popping up every so often to remind everyone they’re still around. They might not be the biggest prog metal band in the world, but – whisper this quietly if you like – they might just be the best.