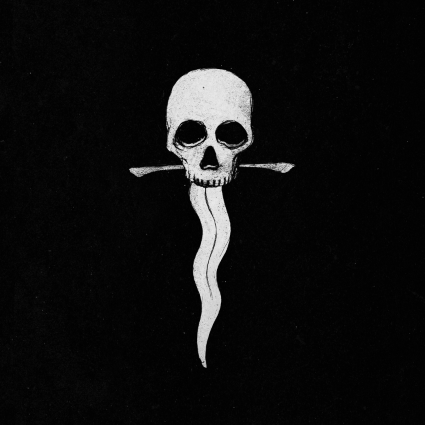 Back at the start of the year MV received a press release from the awesome people at Ripple Records. The world’s finest purveyors of fuzzed up groove had signed another band who were going to do just that because, you know, they wanted to.

Just by looking at Sweat Lodge you knew they were going to be ace. And yeah, you should never judge a book by its cover perhaps, except that when that cover is four blokes (the band is now a five piece) who look about 20, but appear to have walked straight off the cover a Sabbath record from 1970 you can have a damn good stab at it. One look at ’em and you just knew.

But whilst eight tracks that make up “Talismana” owe a debt to Ozzy’s men, there’s a lot more to it. And that “it” is basically an ear for a boogie riff, that kinda brings home the thought that if ZZ Top smoked a ton of weed and jammed with Creedence Clearwater Revival and Led Zep the results would probably sound like this.

The whole thing begins as it means to go on: with a big old fuzzy riff, one which builds into the wonderful “Tramplifier,” and that’s before the psych-like tones of the single “Bed Of Ashes” which would bring a tear to Tony Iommi’s eye.

Another thing that “Talismana” (the album as a whole rather than the title track itself) does is get its point across a lot quicker than you think it might. “Slow Burn” feels like it should be an epic, but in reality is just over two minutes of swirling brew, and it’s not the only one. Where most songs of this type sound like a jam, Sweat Lodge avoid this neatly.

Although eager to run the full length of all things classic, the record feels like it has journey of its own, “Boogie Bride” ties up any remaining loose ends, before “Heavy Head” thuds and has the heaviest fastest riff here to give a slightly unexpected close.

End song aside, most other times “Talismana” is the soundtrack to your lazy summer Sunday afternoon of doing nothing. The sound of chilled out men who don’t want to get out of their hammock all day. Glorious, comfortable and brilliant.