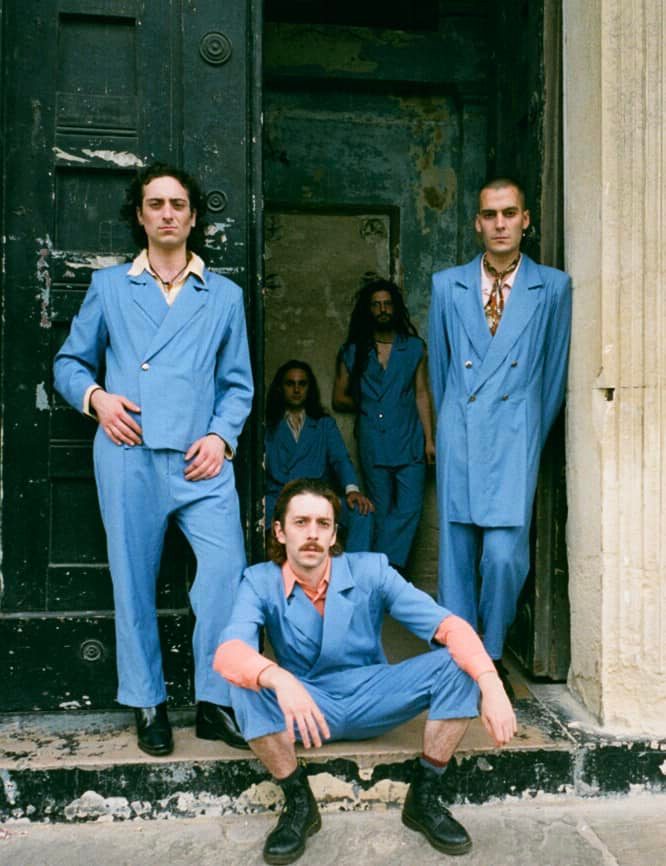 THE GULPS are pleased to present the official video for “Stuck In The City”; their essential new single out on Alan McGee’s It’s Creation Baby imprint.

Directed by Sandra Crilo and shot around Soho over Summer 2021, the video follows a day-in-the-life of the band as they immerse themselves in the diverse cultural riches of one of London’s most vibrant quarters.

Mirroring the breathless post/punk score of “Stuck In The City” with visuals of a heart-stopping intensity and searing performance footage, it offers further credence to McGee’s claim that The Gulps are “the best band I’ve signed since Oasis”.

Speaking about the video and the decision to film in Soho, The Gulps say:

“We wanted to show a bit of the life in the city, so we thought Soho was a great place as there are so many different contrasts around there. At night especially is when you can see many different and extravagant people. We love that aspect of London but we also think that’s where there is a lot of inequality between people’s lifestyles, with an omnipresent capitalism that they can forget by getting drunk and taking drugs, diving into a digital life. That’s when you start feeling stuck, the idea of your life and the continuous bombardment with advertisement, that sells you an empty stimulus of happiness.”

A visceral punk/rock track for our times, “Stuck In The City” is a song about the slow death of a society crumbling before our very eyes. A wake-up call like an atomic bomb, it’s a track that finds The Gulps railing against the powers-that-be while swinging at the docile public sleepwalking into its demise. As frontman and songwriter, Harry All explains of the single:

“These days we’re living I feel society is falling on a deep clean sweep without getting us in torture labs. Our today’s torture labs are advertisement, consuming, social media… Becoming a sleepy society, advocated to consume drugs, to get likes, to buy online, everyday we see how mental health becomes a bigger issue in our daily lives.”

With the country going down the sh*tter at an accelerating pace, it’s just as well The Gulps are going places fast. Identified by the legendary Steve Strange as his latest and last discovery before his untimely passing, the band were then signed by Creation Records legend Alan McGee and signed to his It’s Creation Baby label for this 2021 release. Cutting their teeth in some major UK venues on tour with ASH since the return of live shows, the band also managed to catch the ear of Steve Lamacq who has already been championing them on BBC 6 Music recently.

Owning a shared philosophy that “music is everything”, The Gulps are a band who are unafraid of a grand statement or to speak their minds. With a defiant sense of belief in their creations and cause, from their limited shows and releases so far the band have earned a reputation for making insurgent alt/rock masterclasses that rage against the injustices of our corrupt and ailing society, while flying the flag for a new era of rock’n’roll.

Hailing from all four corners of Europe and the Middle East, they are frontman Harry All and guitarist Charlie Green (both from a small town in La Rioja, Spain), bassist Simon Mouchard (from Nantes, France),  rhythm guitarist Francesco Buffone (from Calabria in southern Italy) and drummer Raoul Khayat (from Beirut, Lebanon). Attracted to the UK like moths to its creative flame, the quintet arrived in Camden from their separate corners of the globe and magnetised to one another with one electrifying vision: “We came here to be f**king rock stars” says Harry.

Forming in 2019 and finding a natural chemistry, The Gulps gained an instant notoriety on the live stage, with riotous early shows at the likes of The Alleycat in Denmark Street and Camden’s The Monarch, and later performances at major festivals like Truck Festival and Mad Cool in Madrid; each hallmarked with their own insanities, from stage invasions and fights with security, to stories of almost scalping a fan whose hair got caught in a flailing bass guitar.

Spending the past 18 months intensively writing and rehearsing in their shared Camden apartment (dubbed “The King’s House”), The Gulps have emerged from lockdown with a bristling, brilliant batch of songs that will form the backbone of a planned LP. With early recordings already impressing a certain Noel Gallagher, expect songs about love and darkness, technology and Warhol to line a debut album produced by the legendary Youth Martin.

“Stuck In The City” is the first of those spoils to hit the nation. Arriving with an exhilarating official video, you can tune into it here and now:  https://youtu.be/2W2No6u7c4Q