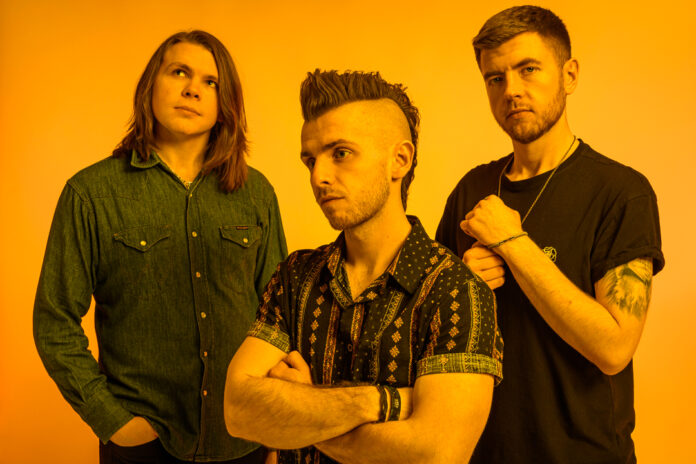 Glasgow-based alt-rock trio Anchor Lane have shared their single ‘Stutter’; an explosive, riff-driven rock anthem that sees the band tackle the topics of social status and peer pressure, from early school years all the way though to adulthood. The single is the first glimpse of their upcoming album, Call This a Reality?, due for release 27th January.

Anchor Lane comment: “‘Stutter’ is about the pressure and expectation built by your peers firstly through school, and then through social media in subsequent years. Looking up old flames, old best mates, trying to size up who “won”. ‘Stutter’ is to do with pressure, and the reminder to keep it in check.”
Anchor Lane‘s upcoming sophomore album Call This A Reality? was produced by BruceRintoul (TwinAtlantic, Fatherson, Vukovi). It follows their 2020 debut album Casino, which went straight to number nine on the Official UK Rock Album Chart, as well as getting the band important support from the likes of NME, BBC Radio Scotland and Planet Rock. Despite being denied the ability to tour the album due to COVID, Anchor Lane secured performances at Download and the Isle of Wight Festival, as well as key support slots with Eagles of Death Metal, Tremonti and Cheap Trick.

Anchor Lane are currently on tour in the UK supporting The Virginmarys, with a couple of headline dates slotted into their busy schedule. Catch the band at one of the shows below: