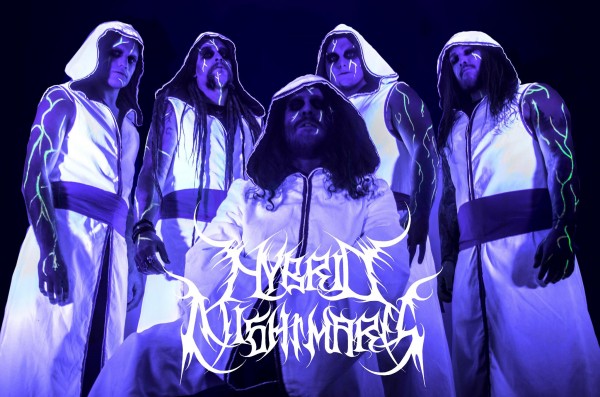 Australia’s extreme metallers. One of ’em is called Batman…..

All the hallmarks of a great Extreme Metal band are here: whirlwind rhythms, hypnotic arrangements, churning black moods, triumphant melodies. A hybrid of the best elements of Extreme Metal. Austrailia’s Hybrid Nightmares are a band that refuse to restrict themselves to any one style of Metal and are able to capture a sound that transcends genre and reflects a diverse spectrum of influences and inspirations. Always eager to defy expectations, offend and entertain. The First Age was recorded & mixed by Ben Plant of Apollo Studios and mastered by Tony Lindgren at Fascination Street Studios (Opeth, Amon Amarth, Enslaved).

Hybrid Nightmares are releasing their new 4 CD project titled ‘The Ages’ over the course of 2015. The release will consist of over 100 minutes of music with ‘The First Age’ (CD 1) being released on the 17th of February.

Formed in 2008 this quintet has earned a reputation as one of Melbourne’s best live acts through a chaotic, relentless and above all, entertaining live show. Taking influence from black, death, groove, folk and classic heavy metal, the ‘Nightmare’ sound is a sonic maelstrom that defies any categorization other than ‘extreme’. Not content with simply playing to an Australian audience, Hybrid Nightmares are looking to the global metal scene and will bring their worship of the Cult of The Obelisk worldwide.

‘The Ages’ is a 4 CD collection that explores the rise and fall, evolution and extinction of mankind across four eras of existence.

“After creation, we have an era of peace. Death and disease are unknown – all that exists is perfect order and harmony across the cosmos. All things must end, however, and as the first man dies, the first vestiges of chaos herald a new age. As man becomes more and more frightened of losing what he has, war and conflict break out, bringing in an age where order and chaos are just barely balanced. When this balance breaks, chaos reigns supreme, with death and destruction as the only rulers of the stars. At the end of this age, we see a rapid decay….and a rebirth. The cycle repeats. And repeats again. But every age has its story, and every story has its teller.
Soon, these stories will be told.” says the band.