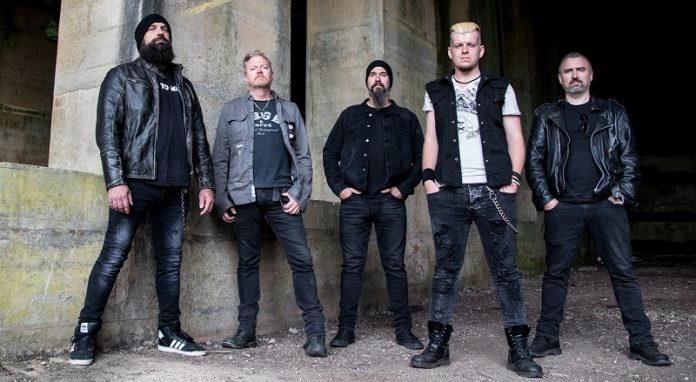 STORMBRINGER release their second track from new album ‘Born A Dying Breed‘, due to be released in November, with the full promo video for the blistering rocker ‘Bleed For’

Their monster third album ‘Born A Dying Breed‘ will be released on 3rdNov and it sees the band really ramping things up a notch, huge chunky hard rock tracks intermingled with some sublime songs showcasing their lighter touch, this truly is a fabulous album and should see them rise through the ranks with speed.

Northants rockers STORMBRINGER formed in summer 2011 when founding members Jon Quantrill, Dom Wallace, Ash Smith and Darren McCullagh got together to write and create what would become the 2013 debut album ‘MMXIII’, recorded with vocalist Mike Stockley. A mix of classic rock and heavy metal with a contemporary edge saw Stormbringer quickly set themselves apart.
After successful years gigging including shows at Download Festival and a main stage appearance at Bloodstock Open Air Festival, inspiration and determination was high when work began on what would be their second album. Jimi Brown replaced the vocals in the line-up and became part of the band late 2014, completing the recording of ‘Blood and Rust’, released in Oct 2015. Stormbringer would carry on to feature on Scuzz TV, in Metal Hammer magazine and would complete gigs, tours and shows all over the UK.
Their latest album ‘Born a Dying Breed’ is released through Attic Records on November 3rd 2017 kicking off a November/December tour. Jamie Peters joins the band on guitar completing the line-up that delivers STORMBRINGER’s all-out live show.