Stop Yawning At The Back 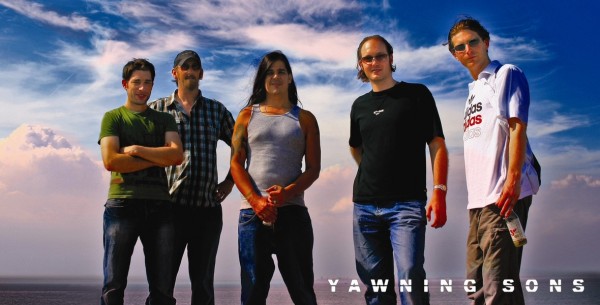 ALONE RECORDS are proud to present the vinyl release of the desert rock classic CEREMONY TO THE SUNSET.
Limited to only 500 copies housed in a deluxe gatefold housing on either transparent yellow, red or orange and includes the original closing album track from the studio master tapes not on the 2009 release!

CEREMONY TO THE SUNSET has proven itself as a classic desert rock album and five years after initial release deserves the fullest vinyl release treatment – a revelation to fans of any and every of the artists involved.

After the release of the debut SONS OF ALPHA CENTAURI album they invited Californian desert- rock veterans YAWNING MAN, the original instrumental Godfathers of desert rock to visit the UK to work with them on their second album.
Upon the first day of working in the studio, it was clear that a new direction was to be taken writing and recording their own album under the new name YAWNING SONS. The week’s work bore fruit in the form of an interwoven musical netherworld of lush musical landscapes and ambient textures.

Once the recordings were taken back to the desert then legend about the record grew and desert musicians immediately committed to the concept of YAWNING SONS through vocal recordings from Scott Reeder (KYUSS/OBSESSED), Mario Lalli (FATSO JETSON) and Wendy Rae Fowler (MARK LANEGAN BAND/UNKLE/EARTHLINGS?).