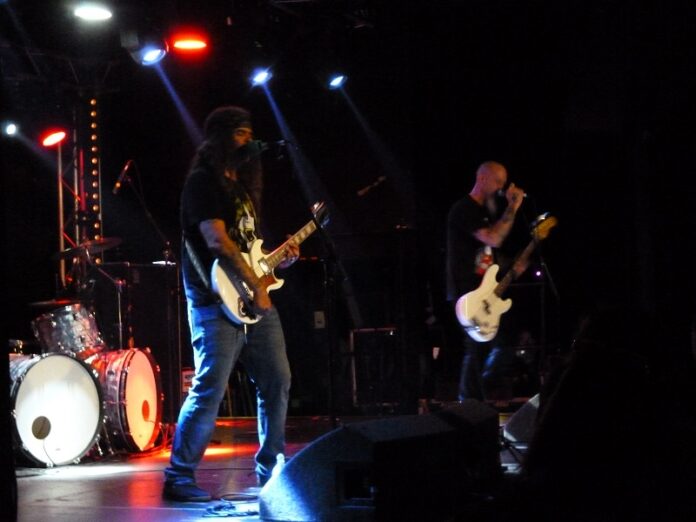 Stöner is a rock project formed in 2020 by former Kyuss members Brant Bjork and Nick Oliveri, alongside drummer Ryan Güt. Their sound would be categorised as stoner / desert / doom rock. The band released their debut studio album `Stoners Rule` around ten months ago and arrive in the birthplace of heavy metal on the penultimate date of their eleven day trek of the UK and Ireland.

The lights dim and with no fuss the trio head on stage say a “hi everybody we`re Stöner” and head straight into the mesmerising slow burn of `Rad Stays Rad` and it`s throwaway quip on life in “shit don`t change” and it`s as if the whole place has been stunned by a cattle prod. There`s not let up in intensity as `The Older Kids` with it`s cracking reverberating bass line follows before Nick takes over vocal duties for

I`ve never driven but if I did `A Million Beers` would be my choice to share with all and sundry as I crank open the windows and allow this deeply resonating offering with its wah wah riffs to enter one`s psyche. There`s a kind of funky intro into `Stand Down` which took us all off on a psychedelic trip for a little while.

I have to say I love ` Own Yer Blues` which is a stunning bluesy slow burn with that trademark Stöner edge to it. I thought `No Brainer` had a kind of Led Zep texture as it ebbed and flowed.

I might be completely wrong but i`m sure Brant dedicated `Nothin’` to Sid Vicious but maybe my hearing was a bit shot by then. `Party March` was wonderfully all over the place followed by `<>` which raced along before the Hendrixy `Strawberry Creek (Dirty Feet)` sucked us all in.

The show closed out with a Motörhead cover with the interesting choice of `R.A.M.O.N.E.S.` and intoxicating `Tribe/Fly Girl` which had me drifting off wonderfully in it`s quite mesmeric powerful intensity. It also gave Brent the opportunity to highlight his underappreciated guitar skills.

The guys returned to the stage and offer up a couple of Kyuss covers in `Gardenia` and `Green Machine` where this intimate audience hold their arms aloft and point at the band as they sing and chant along. Nick leaves his bass on stage with howling feedback as Ryan thanks us all for coming and we head home after a delightfully potent and all-consuming ninety minutes.

Tonight, was one of those gigs that I was too emotionally and physically engaged in to fully appreciate and reflecting back after the performance I can now appreciate the dynamic of what I was witness to. It`s easy to write the band off as a metal band with fuzzy guitar riffs, a throbbing bassline and pounding drums but that`s too simplistic. There`s a real subtly in those complex and intricate chords shared and an almost hidden beauty beneath.

The fellas head over to Europe for the rest of May after a show in Bristol tonight and if you didn`t catch them then I have to say it`s your loss.