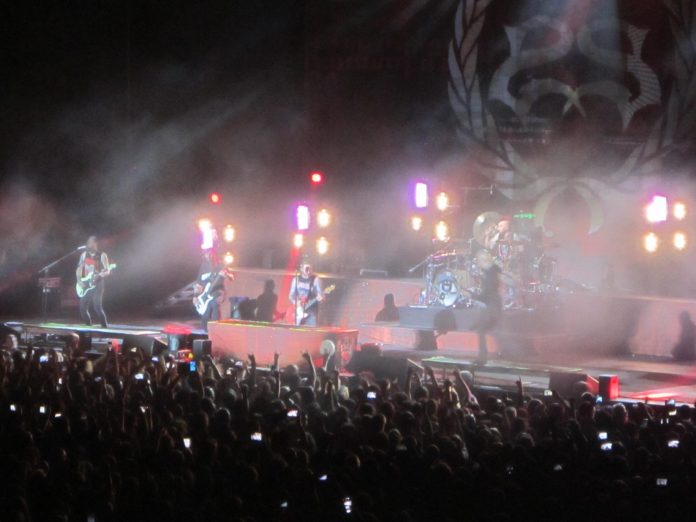 Stone Sour were formed in Des Moines, Iowa in 1992 and took their name from an alcoholic drink that consists of one-part whiskey, one-part orange juice with a splash of sour mix. The band today comprise of Corey Taylor (lead vocals and guitar), Josh Rand (Rhythm guitar), Johnny Chow (bass), Christian Martucci (lead guitar) and Roy Mayorga (drums) They`re over this side of the pond to promote `Hydrobad` their sixth studio release and follow up to 2012`s `House Of Gold & Bones Part 1 and Part 2`. The album is a more back to basics, straight up rock and roll album. The title comes from a misread flight information board, viewed whilst Corey was racing for a plane some time ago in Eastern Europe.

The show rolls in Birmingham on a bitterly cold November night and as the lights dim the boys explode on stage as the instrumental “YSIF” or You Suck in Full is pumped through the p.a. and it`s straight into “Taipei Person / Allan Tea” and “Knievel Has Landed” from the new release.

The unnerving, pounding, thumping almost nursery rhymish “Made Of Scars” follows and the audience are pounded into submission. Corey comes up for air to tell the faithful how much the guys love this sacred isle and especially `Brum` He`s proud to say it`s the biggest gig they`ve played so far in this city and it`s special as it`s the Birthplace of Heavy Metal.

“Say You`ll Haunt Me” is belted out before a scatter gun is procured from the side of the stage and Corey fires out a mixture of confetti and streamers over the appreciative spectators. “30/30-150”, “Hesitate” and “Tired” quickly follow before another new track is shared with the strangely titled “Rose Red Violent Blue (This song Is Dumb & So Am I).” The tribal “Do Me A Favour” gets an airing before it`s back to the first album and “Cold Reader” and “Get Inside” send the mass into a frenzy. Indeed, a large circle pit forms in front of the stage. Visually stunning from my vantage point but I’m not so sure I’d want to be in it. Another new tune “Song #3” and it`s a sort of love song delivered at a fair pace before we get the wonderful anthem “Through Glass”

As the boys are in Heavy Metal mecca they close out the show with a cover of Black Sabbath`s “Children Of The Grave” before leaving the stage.

A few minutes respite before they return with the pulsating “Gone Sovereign” which segues into “Absolute Zero” before they leave us with a final track from `Hydrograd` with “Fabuless” which is blistering with Corey almost rapping the lyrics.

Well what can you say, this was a scorching show that gave a little of everything and certainly warmed up a bitter November night.