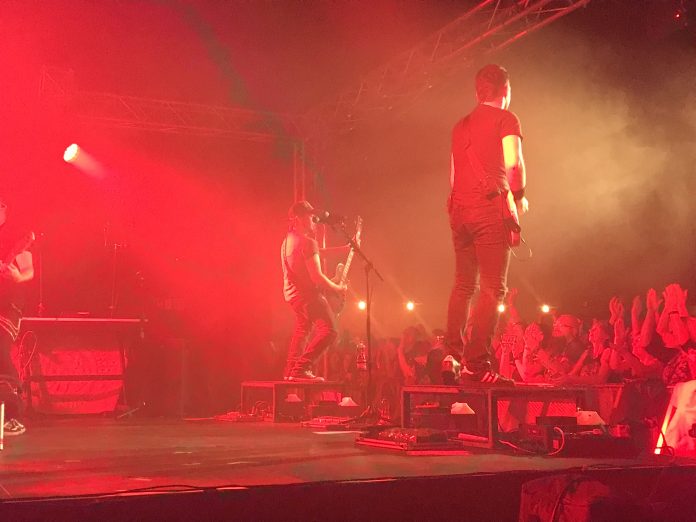 “You, Birmingham are in for 40 minutes of rock n roll. No messing about.” Shane Greenhall, to be fair, in one way at least, has done the job of reviewing this for me, but in another the Those Damn Crows singer is selling his boys a little short. “No messing about” might mean no frills, workmanlike maybe, TDC are way, way better than that. The next, well, Stone Broken you might say. But those 40 minutes of rock n roll, goodness me, they’re entertaining. Essentially the same as when they played with Massive Wagons at the end of last year, the Bridgend quintet have that special “something” that you need to succeed. The re-release of “Murder And The Motive” has really put their music into the forefront, and new song “Long Time Dead” proves that the album was no flash in the pan. “Someone Someday”, “Behind These Walls” and “Breakaway” show they have just a natural in-built ability to write choruses and hooks. And the closing “Rock N Roll Is Dead” is a ready anthem with a bow on top. The interesting thing happened a little before that, though. Greenhall surveyed the crowd and says – as a support band always does – “Who’s here to see Stone Broken?” and follows it up with “And who’s here to see us?” The cheers were nearly as loud. That speaks volumes (literally) for where Those Damn Crows are headed. 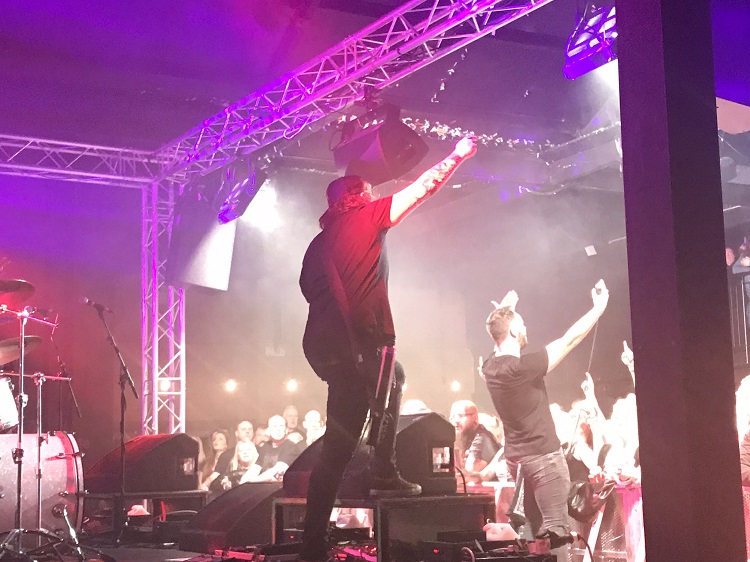 I had to check this in the archives, but on the 18th December 2015, I went to Wolverhampton to watch a Walsall band called Stone Broken do the album launch show for their full-length debut record. I wrote this sentence that night: “This is arena rock on a local scale and tracks like “Better” can’t understand why they are not 20 miles down the road in the Birmingham arenas.”

Tonight, The Mill, which holds 700 people, is heaving. It’s been sold out for weeks. And moreover, it’s packed with people who know every single word of every single song.

Frontman Rich Moss tells a story halfway through the set: “you know the little bar just up the road, Subside?” He says. “We played that three years ago to 25 people. This is amazing.”

It isn’t, though. Not really. Even in this world where we keep being told no band can make it, Stone Broken are the ones who went and said, “nah we ain’t being told no.” So they worked their arses off. They played and they played.

And lets not kid ourselves here, they have got a collection of songs that aren’t too dissimilar from a cross between the bands I grew up with (and there’s a medley tonight after the drum solo that includes Warrant, so we’d have much to discuss), the big beasts of US 80s rock, and a sort of West Midlands Nickelback (as ever meant positively on these pages) and, crikey, their songs come over well on the radio.

For 75 minutes tonight they deliver a masterclass in how to realise ambitions. “Stay All Night”, “Heartbeat Away” and “Better” absolutely shine like diamonds here. “Home” – extra poignant tonight – is anthemic, but nothing compared to new single “The Only Thing I Need” which here comes complete with a choir.

“Let Me See It All” shows something of a sleazy side, maybe, “Follow Me” is just a fine song, and “Worth Fighting For” ends the set in raucous fashion.

The encore sees Moss sing “Wait For You” with 700 of their nearest and dearest, and as it builds and  as “Not Your Enemy” becomes the musical equivalent of when football teams win something and do the tour of their home town, it becomes clear. Stone Broken, you see, are right on the cusp. They are going to make it. They were always going to make it. It is now just a case of how big they get.