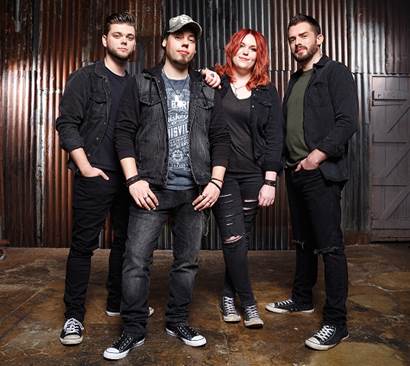 Stone Broken tackle the sensitive issue of domestic abuse head on with the release of a rousing narrative and performance video for current single, ‘Heartbeat Away‘. The video, released exclusively with Kerrang!, features on forthcoming studio album, Ain’t Always Easy, set for release on March 2nd 2018.

The ‘Heartbeat Away’ track resonates deeply with the band, depicting the all too familiar story of a woman in a violent relationship; a young man, living next door, frequently hears the hostility but isn’t sure what best to do…

Moss says: “The subject of ‘Heartbeat Away’ is a little closer to home than most of the other songs I have written… seeing the impact that domestic violence has on a person you are close to and the way it affects the people around them isn’t a very nice thing to experience. I thought it was time to shine a light on something that usually happens behind closed doors, hidden away from the rest of the world. When people listen to this song I think they will know that it’s personal and that I mean every word.”

An extensive run of US shows in support of Adelita’s Way and Sons of Texas has been confirmed for March through April of this year. Visit the band’s official website www.stonebroken.com/shows for a full list of appearances.

Meanwhile, Stone Broken will be performing a short acoustic set, then meeting fans and signing copies of their new album,Ain’t Always Easy, at the following HMV stores:-

Access will be on a first come first served basis with a purchase of the new album from HMV on the day of the event.

Please note that due to the tight schedule and the desire to meet as many fans as possible, the band will only be able to sign copies of their new album.