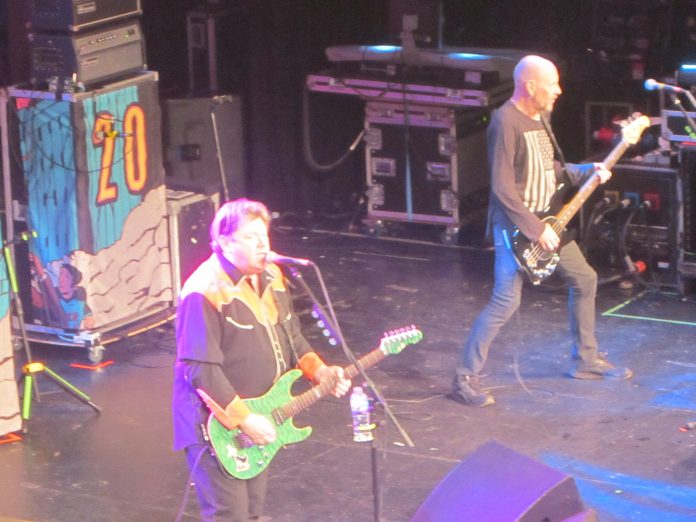 Back in the mists of time, when I was a teenager and Punk was all the rage, there was an outfit that almost stood apart from this genre. They were called The Adverts and the mainstays of the band was a fella called Timothy “TV” Smith and a lady called Gaye Advert who was really the “first female punk star”  A good friend of mine still maintains that they were better than the Clash but sadly they shone brightly from 1976 to 1979 before breaking apart before I ever got to see them. Fortuitously, singer- songwriter TV Smith has continued to tour as part of a band or solo and is the warmup for tonight`s gathering. 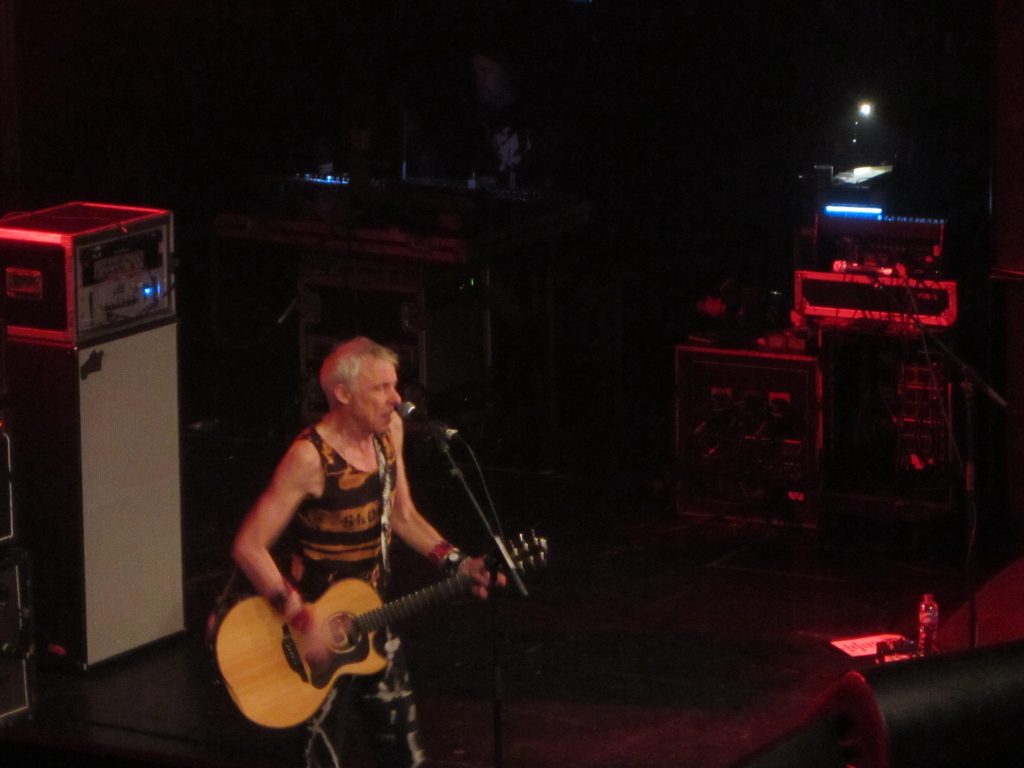 Those of us who manged to get here early were treated to a glorious thirty minutes that included newer solo material such as the compelling `No Control`, anthemic `Lion And The Lamb` and thoughtful `Land Of The Overdose` along with a nod to the past with The Adverts classics such as `No Time To Be 21`, `Bored Teenagers`, debut single `One Chord Wonders` and the chart hit `Gary Gilmore`s Eyes`

A controversial song in its day. Gary Gilmore was the first person executed in the United States after the Supreme Court lifted the moratorium on the death penalty in the mid-1970s. An American murderer, who wanted his eyes to be donated to medical science after his execution.

Next up are The Professionals, yeah that band with Paul Cook from the Sex Pistols. We get a frantic forty-five minutes of no-nonsense punk rock. The band kick off with `Join The Professionals’ before we get a few cuts from the band`s last release “What In The World” including the wonderfully anthemic ‘Rewind’, riff laden ‘Bad Baby’, raucous ‘Hats Off` and their tribute to the late David Bowie with ‘Going, Going Gone’ A few oldies are thrown in for good measure with `Kick Down The Doors`, snappy ‘123’ and impassioned `Just Another Dream` and a Sex Pistols cover with ‘Silly Thing’ The guys share a cracking cover of The Monkee`s `Steppin` Stone` and a couple of new tracks from their set of three Kingdom Come, Curl Up And Cry and Twenty Twenty Vision EP releases with `Kingdom Come` and `20 20 Vision` This stabilised line up of Paul Cook (vocals/drums), Chris McCormack (guitar), Tom Spencer (vocals/guitar) and Toshi JC (bass) and all seem to be relishing being on the road together and having seen them a few times in the last couple of years it`s certainly paying off. 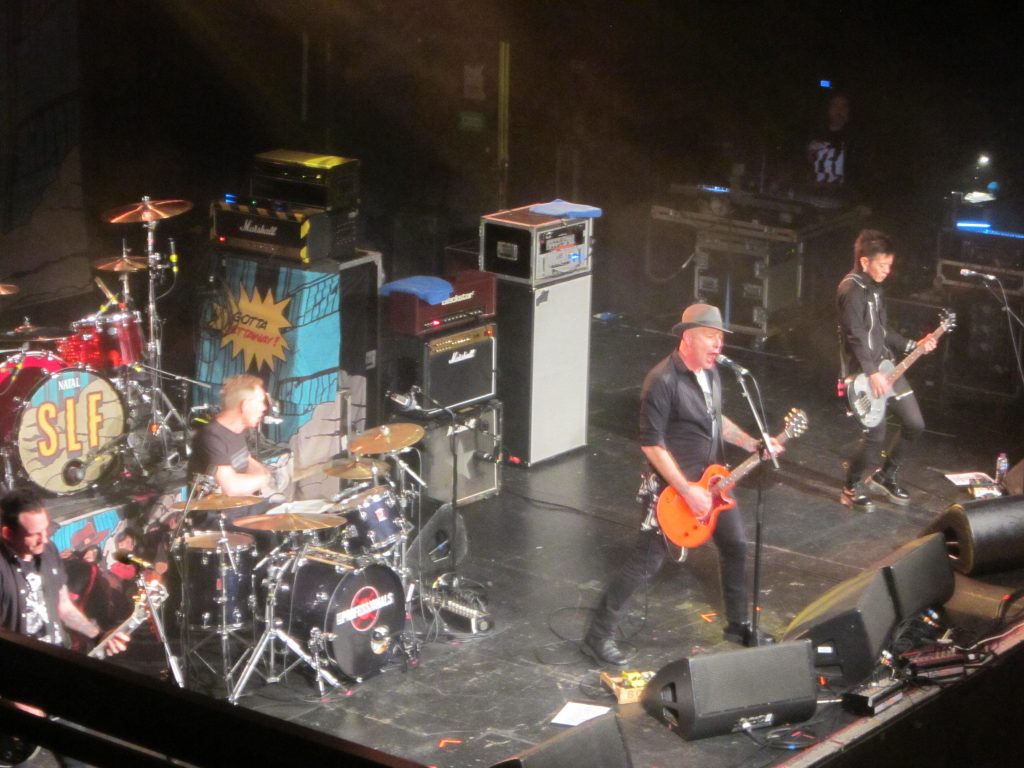 Stiff Little Fingers `20 20 Tour` was due to take in thirteen dates during March but the Scottish shows have been cancelled due to the concerns over the spread of the current coronavirus and the shows recommencing in Newcastle at the end of next week may yet suffer the same fate. Indeed, most gig gatherings may soon be placed on hold so what better a way for us to possibly sign off than to rock out with Celtic Punk Rock Royalty Stiff Little Fingers. I first saw SLF at the Institute in Birmingham over forty years ago in May 1979 with Robert Rental and the Normal and Essential Logic. Then my mate`s reggae band Weapon Of Peace toured with them, so we got passes to see them at the Birmingham Odeon in 1981 with a band, in support, called Another Pretty Face who later became the Waterboys. We ended up at a party in a nearby hotel and I have to say the fellas were the nicest guys you could ever wish to meet. I still have my signed concert ticket today.

As usual, the marvellous `Go For It` is piped through the pa and has the faithful humming along as the lights dim and the boys hit the stage and smash straight into `Fly The Flag`, then `Rough Trade` and `Gotta Getaway` before they come up for air and Jake Burns says this is a very different night and a different start to the show with three songs from forty years ago. A new song `Hate Has No Home Here` is shared before the exhilarating `Nobody`s Hero` has everyone screaming, shouting and jumping around. The band share some less well known tracks with `No Surrender` and 16 Shots` interspersed with classics such as `Wasted Life`, `Just Fade Away`, a cover of The Specials `Doesn`t Make It Alright` and possibly their one and only love song ` Barbed Wire Love`

Jake acknowledges his struggles with depression, a subject that men especially can`t seem to talk about and shares `My Dark Places` a song that is almost an encouraging anthem about this difficult topic. The show closes out with the reflective `At The Edge` and a couple of songs written about the troubles in Northern Ireland `Tin Soldiers` and `Suspect Device`

It doesn’t take long for our heroes to be encouraged back for a three song encore which includes a cover of Bunny Wailer`s `Roots Radicals Rockers & Reggae`, `State Of Emergency` and ending with an explosive version of `Alternative Ulster` before the band takes a bow and exits the stage. Well who knows what the future holds gig wise but there was no better unit to finish with for now, than these punk rock legends who were certainly on fire and delivered a set that had this loyal audience well and truly ignited. Some Inflammable Material was certainly delivered once again tonight.