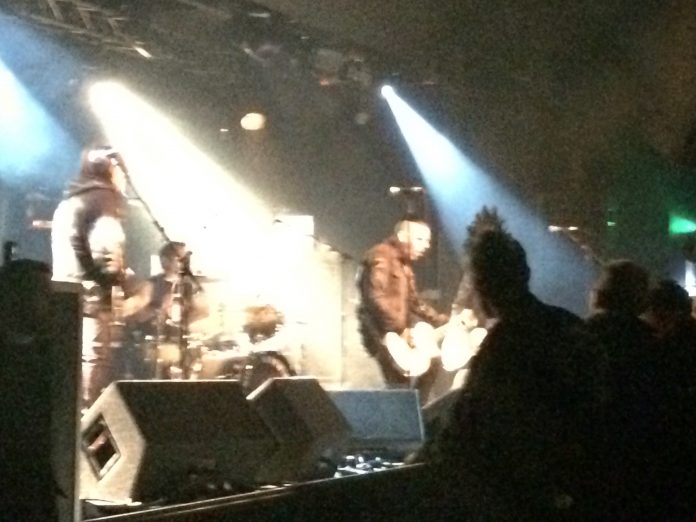 Quite a night in Nottingham as the Northern Irish take over

So you are the frontman in the best – and one of the most successful- rock bands on the planet right now and you’ve got time off. What do you do? Well, if you’re Ricky Warwick you get a load of your mates together, form the Fighting Hearts and get out on the road.

It helps of course that you have not one, but two records out at the moment. Too good to remain on Pledge, “When Patsy Cline Was Crazy And Guy Mitchell Sang The Blues” and its acoustic counterpart “Hearts On Trees” form the major part of the set tonight. “The Road To Damascus Street” kicks things off and “Celebrating Sinking” is already approaching a classic. “……Blues” itself likewise but that is a fine storytelling tune and “Schwaben Redoubt” – which is the only “….Trees” song amongst the rollicking 45 minutes and which features SLF singer Jake Burns on the record – is a wonderful metaphor for friendship.

There’s a couple of unexpected diversions too. “The Arms Of Belfast Town” from the previous solo album “Belfast Confetti” is given an almost punk makeover, while Black Star Riders’ wonderful “Finest Hour” (the Fighting Hearts also feature BSR bass man Robbie Crane) and a faithful run through of “Tommy Gun” are all very well but it’s the closing “Jonestown Mind” that gets The Almighty fans here misty eyed and dreaming of what might have been.

In the present though, such is the evident chemistry onstage that you wouldn’t bet against Fighting Hearts becoming a fixture in the Warwick schedule. Assuming time can be found, of course. (Andy Thorley)

Northern Ireland’s Stiff Little Fingers have always had a potent energy about them. Of course, it’s pretty much a given for a punk band to have plenty of energy, sometimes it’s controlled aggression and others it’s wild abandon, but SLF manage to place themselves consistently somewhere inbetween.

The band, in their various formations, have been fighting the good fight for nearly 40 years. Ever present frontman Jake Burns has passionately stuck two fingers up to the establishment and its myriad of phoney, wasteful and egocentric sub-groups.

In lesser hands the old anti-establishment rhetoric might be seen as a little cliché but we are not dealing with any old band here. Burns has never been afraid of tackling subjects that other bands would sprint Usain Bolt-like to avoid. It’s that kind of attitude that makes the band received the kind of ovation that they do tonight.  Before a chord is struck the adulation and anticipation is palpable.

“Wasted Life” kicks things off in a raucous fashion. It’s immediately followed by “Just Fade Away” and the party is well and truly in full flow.

The band don’t throw themselves around the stage like the old days anymore. The same can’t be said for the old school punk fans who flood the floor with a mixture of spasmodic arm waving, head banging and seemingly involuntary violent jerks!!

When “Roots, Radical, Rockers and Reggae” appears it’s one giant swaying mass of a thousand hardy souls determined to take in every moment.

“Nobody’s Hero” receives a predictable rapturous welcome and singalong. Whilst a tribute to John Bradbury of The Specials via “Doesn’t Make It Alright” provides a touch of poignancy and emotion.

Of course the loudest cheers are reserved for the punk genius of “At The Edge” and “Suspect Device”. They are stunning three minutes of pure adrenaline when listened to in the home but in the live environment they take on several other dimensions. Tonight is no exception.

The “I’m alright” refrain of “Fly The Flag” gets the blood pumping and the crowd in a frenzy. Likewise “Tin Soldiers” never fails to illicit a crowd reaction.

The band are as tight as ever and in keeping with Burns’ darts player appearance all their musical arrows hit their intended target.  The match winning double top of “Gotta Getaway” and “Alternative Ulster” seals victory for the Belfast boys. The Stiff Little Fingers have been let loose all over Nottingham.

In the last few months the rock/metal/punk world has lost more than it’s fair share of heroes. Whether it’s the unrelenting and unapologetic Lemmy or the chameleon-like David Bowie it’s a fact that 2016 is worse off without them around. All this means that we should embrace and watch those iconic bands and artists that are still with us whilst we have the chance.

Whilst Stiff Little Fingers would not claim to be in the same “legend” bracket as Lemmy and Bowie they are none the less a punk rock institution that has never sold out, wavered or compromised in their integrity and vision. Not many bands can say that. (Donnie Kemp)