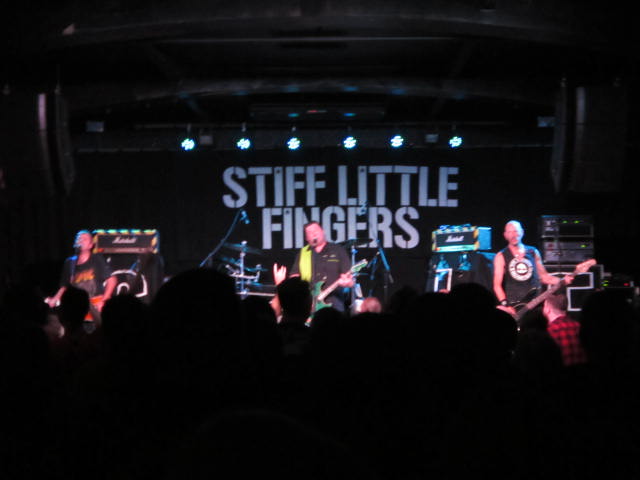 Damian (who is very old..!) renews acquaintances with a band he first saw nearly 40 years ago

I first saw SLF at the Institute in Birmingham 37 years ago in May 1979 with Robert Rental and the Normal and Essential Logic. The Inflammable Material album was out and this was the (excuse the pun) hottest ticket in town. They did not disappoint. I have seen them, albeit infrequently, down the years but couldn’t resist this show. It was a Rebellion Festival warm up in a cracking little venue.

The band these days comprises of founding members Jake Burns and Ali McMordie with Ian McCallum and Steve Grantley who have been with the group from the early to mid nineties.

The place is rammed as the lights dim and we get the intro “Go Fot It” with everybody humming away. The guys arrive on stage and it’s straight into “Wasted Life” and “Just Fade Away.” The band have always been more than a punk band and have a solid history with reggae, so we get the Bunny Wailer song “Roots Radicals Rockers and Reggae” before anyone  comes up for air.

The frontman says something about being happy to be back in Nuneaton and one of the faithful replies “You fuckin` love it” to which Jake replies “I wouldn’t go that far.” It was that sort of gig.

“Guitar and Drum” is introduced as an antidote to the garbage churned out by Simon Cowell. The classics of “Nobody’s Hero” and “Barbed Wire Love” are shared before we get “Listen to your Heart”

A shout out to the memory of local boy John Bradbury and we are gifted a wonderful version of The Special’s “Doesn’t Make It Alright” with the masses singing along.

Fingers have always written about injustice and that remains true to this day. We get two songs about the abuse of power in the guise of “Silver Lining” from over thirty years ago and recent recording “Silver Lining.”

“Fly the flag” and the song “When we were young” written about a low time Jake shared with fellow countryman, the much missed Thin Lizzy front man Philip Lynott  about their careers. The song was started in 1984 and completed in 2004. The final two songs “Tin Soldiers” and “Suspect Device” send the crowd into hysteria.

The  for a two song encore of “Gotta Getaway” and the song that Jake’s good friend and fellow Ulsterman, the magnificent Ricky Warwick (The Almighty & Black Star Riders) revealed that he’d wished he’d written, “Alternative Ulster”

A brief “Goodnight and Thank You for Coming” and the fellas leave us all in chaos, completely drained but buzzing. This was a cracker of a show and it was a real privilege to say, I was there.

It may be 37 years on from Inflammable Material but this was a gig where the boys were certainly on fire and the audience were well and truly ignited.