When you’ve got a band called [insert name here]“and” the “something”, it’s usually integral to the plot that the first fella turns up. Barrie Masters, the “Eddie” in Eddie And The Hot Rods is unfortunately unwell tonight (he’s been struggling for the last few shows apparently) but rather than cancel, like less intrepid bands, The Hot Rods are made of sterner stuff. What they do is Ian “Dipster” Dean merrily drops his bass and does the vocals. What it means in practice is a very different set: “I’ve been playing these songs for donkeys’ years, but I only know the words to the newer ones” Dipster helpfully explains. And whether its because of the adversity, or just the general have a go, up and at ‘em vibe of the whole thing, but this is a 45 minutes of much fun. “Bad Time Again” starts things, and if “Teenage Depression” and the cover of J Geils “Hard Drivin’ Man” are staples of many a set, then they are delivered in a much different way. Likewise, songs like “High Society” and “What Do I Care” are indictive of the fresh influx that this had to have by necessity. It does end the way you thought it might. That is to say with “Do Anything You Wanna Do” and “Gloria” but it is striking that Dean sings even these in his own way. For one thing, the band deserve much credit for not cancelling when many would’ve, but for another, the fact they didn’t is probably why Eddie And The Hot Rods have lasted this long. 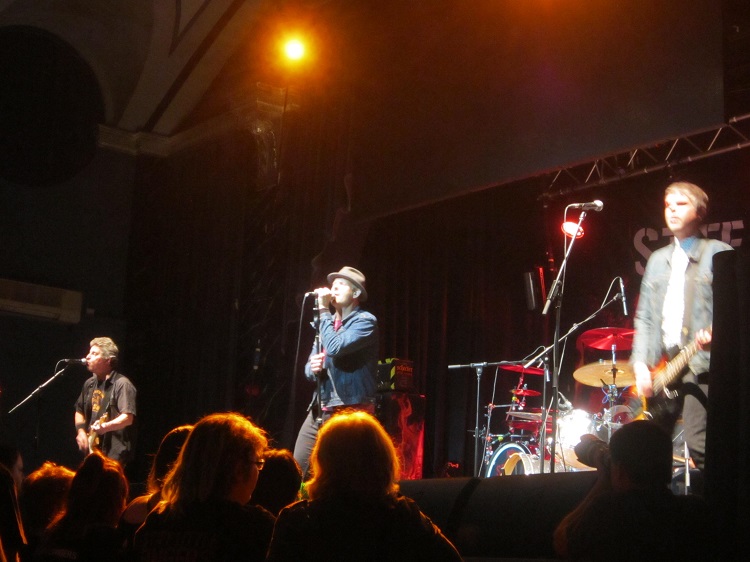 “For those that haven’t seen us in a while” explains Jake Burns, “we’re trying to hit as many different points as we can on our albums…..for those that saw us in March….its the same old shite.”

I did see them in March, but I am back again for two reasons. Firstly (and I’ll forgive you for not giving a shit about this) the view from the disabled section that I have to use was abysmal and I never actually saw them at all, but also that Stiff Little Fingers are a magnificent band – and any time you can see them you should.

Very few bands meld their old and new(ish) together as well as this. So, whilst “Law And Order” starts things, being followed by “At The Edge” and both sound as fresh and dangerous as they no doubt did 40 and 39 years ago respectively, this is no nostalgic trip.

To that end the magnificent one two punch of “Guitar And Drum”, and “Strummerville” -which is tonight dedicated to the memory of Pete Shelley and the visceral piece of singer/songwriter style stuff “Guilty As Sin” all show their 21st century work in a fine light too.

Even better, perhaps, they are showing no signs of resting on their laurels. “16 Shots” is full of anger and hasn’t even been recorded yet. It is a continuation of the SLF brand of social commentary, though, as is the anti-racist “Harp”.

Ian McCallam sings “Can’t Get Away With That”  (“don’t worry I won’t tell them you’re a lazy wee shite” jokes Burns) and the frontman himself speaks openly and candidly about his battles with depression before “My Dark Places” and if the pair from the “Nobody’s Heroes” record  – the near title tack and “Gotta Getaway” end things then there’s still the encore.

Just like a couple of months ago, the trio includes the folk song “Drinking Again”, but the vicious “Tin Soldiers” and “Alternative Ulster” are the perfect conclusion.

A little earlier, Burns smiled when he played “State Of Emergency” that you could hear “the 14 year old me that loved heavy metal in here. We’re supporting Metallica next week, we’ll just do this for 45 minutes…..!”

The wider truth is that the fact that Hetfield and the troops asked them on the bill is proof of the resonance that SLF still have, even after all these years. One of the best? You bet. “Same old shite?” he jests, of course.